When I last wrote about Fearless Girl, I observed that the meaning of the little Bull-challenging statue will lie in its interaction with the public, who for the moment has claimed it as an icon of feminism, capturing the vivacity of little girls at that tender age where they still dare to dream. 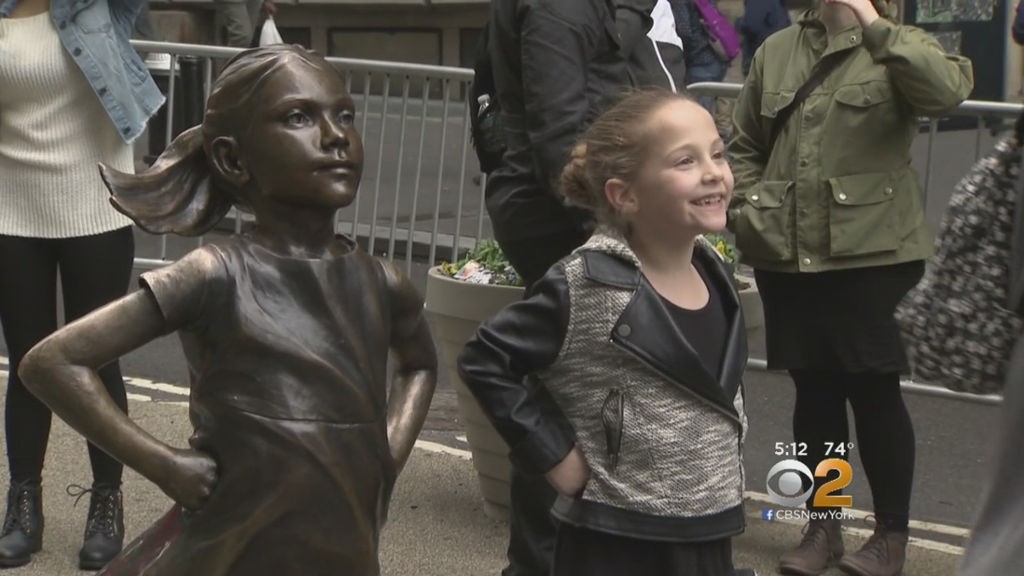 Fearless Girl reportedly now has a permit through 2018, and this has angered none other than the creator of Charging Bull, Arturo di Modica, who has asked for Fearless Girl to be relocated, because it’s making his Bull into a villain.

Here’s a quick version of an argument on behalf of di Modica. Fearless Girl might have been intended by the artist and firm who commissioned her (It? She. Has to be “she.”) as a stunt aimed at promoting the hiring and retention of women in the financial industry, but that’s not how people reacted. She opposes the bull – she’s not riding it, after all – and the public has decided that they’re on her side. If she represents the power of girls, then the bull is now a beast that tramples them.  This substantially changes the meaning of Charging Bull, and the artist, who supports gender equality, does not want that. Given that both pieces are works of public art, he cannot simply declare that Charging Bull is not anti-feminist, because his declaration will mean nothing to the swarms of visitors who see the tableau. Thus, to preserve the meaning of Charging Bull, the Fearless Girl must stand down.

The ethos of street art, according to one influential account, commits artists implicitly to accept its ephemerality; once in the street, the artist should expect to have no say over what happens to it, because historically many works of street art were illicit, and would be removed.  The relevant contrast is supposed to be with sanctioned public art, which by way of having sought official approval, is historically afforded a degree of civic protection. Charging Bull has permission, and in the past has been protected from the threat of physical damage by civic authorities, so one question raised by this case is whether the implicit expectation of civic protection extends to the meaning of the work.

There’s also an ethical discussion occurring between the artworks, which arguably affects how we should view di Modica’s request. Curiously, both Charging Bull and Fearless Girl were presented as if they were street art: installed at night, under the cover of darkness. Charging Bull was even hauled off by the authorities before being rehomed two blocks south; there’s a case for it to be properly considered as street art that owes its permanence to its unexpected welcome reception. (Fearless Girl, the result of an ad campaign, had a permit.) In both cases, the intended meaning of the works were overwritten by the reaction of the public. The street decided that Charging Bull was a symbol of the financial district, and that Fearless Girl symbolized everything opposed to it.

In asking for the city to remove Fearless Girl, however, di Modica is saying that in this case, the street does not get to decide the meaning of his artwork. But can he succeed?  There is a limit to what an artist’s intention can establish – there’s no way to preserve Charging Bull as long as Fearless Girl stares it down. He might sue.

(So far, the mayor is telling di Modica to pound salt.)

But if Fearless Girl is so threatening that she must be removed, might she already have won the battle over the meaning of Charging Bull? Imagine the stories: The Charging Bull is so thoroughly identified with capitalism that the power of the state is called in to save it from a tiny ponytailed girl. We were here first, little lady. It was fine when we did it. Don’t you go trying to change the way things are done around here. Don’t take up space.

Will the bull become a bully?

Notes on the contributor

Mary Beth Willard is Assistant Professor of Philosophy at Weber State University. She works in metaphysics and aesthetics, and writes about street art, including an objectively absurd amount of time spent on the story of this little statue.