On a cold December night in 1989, artist Arturo di Modica installed Charging Bull, a three-and-a-half ton bronze bull, in New York’s Financial District. Di Modica had no official permission to install the statue, which he said symbolized the “strength and power of the American people” following the disastrous 1987 stock market crash. 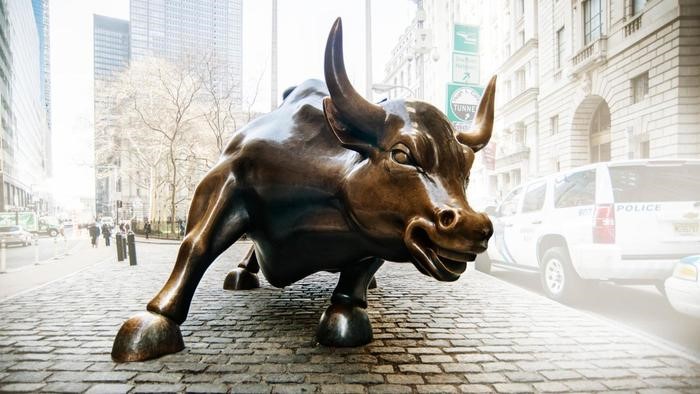 These days Charging Bull is a well-beloved tourist attraction, so you probably don’t remember, if you ever knew, that the immediate reaction to this guerilla Christmas gift was mixed. Crowds loved it, but the police were called by the securities exchanges, who then hired a contractor to remove the bull. Five days later, the city announced that it would have a temporary home two-and-a-half blocks south on Bowling Green, where it stands today.

Charging Bull is a work of public art, so while the artist may have intended it as a testament to the strength of the American people, its meaning is created in part by its interaction with the surrounding public space, and it has become identified with New York and the very securities exchanges that called for its removal in 1989. It is an icon of capitalism, as recognizable as the Statue of Liberty. Tourists travel to see it and pose with it. Rubbing various parts of the statue are thought to bring good luck; this tourist is not an anomaly. 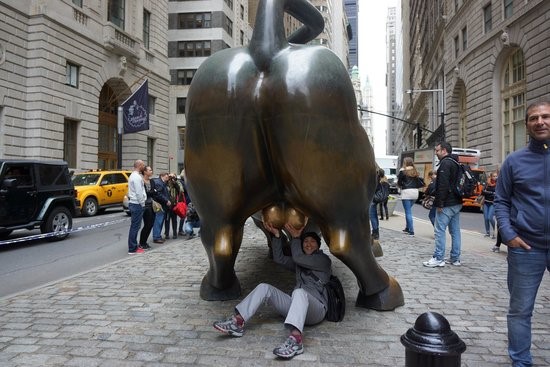 The bull’s identification with capitalism and Wall Street is so complete that during the Occupy Wall Street protests, the city erected barricades around it, fearing that it would be damaged by anti-capitalist protestors. It still has only a temporary permit, but the bull isn’t going anywhere.

And as of last week, the bull has a tiny adversary: 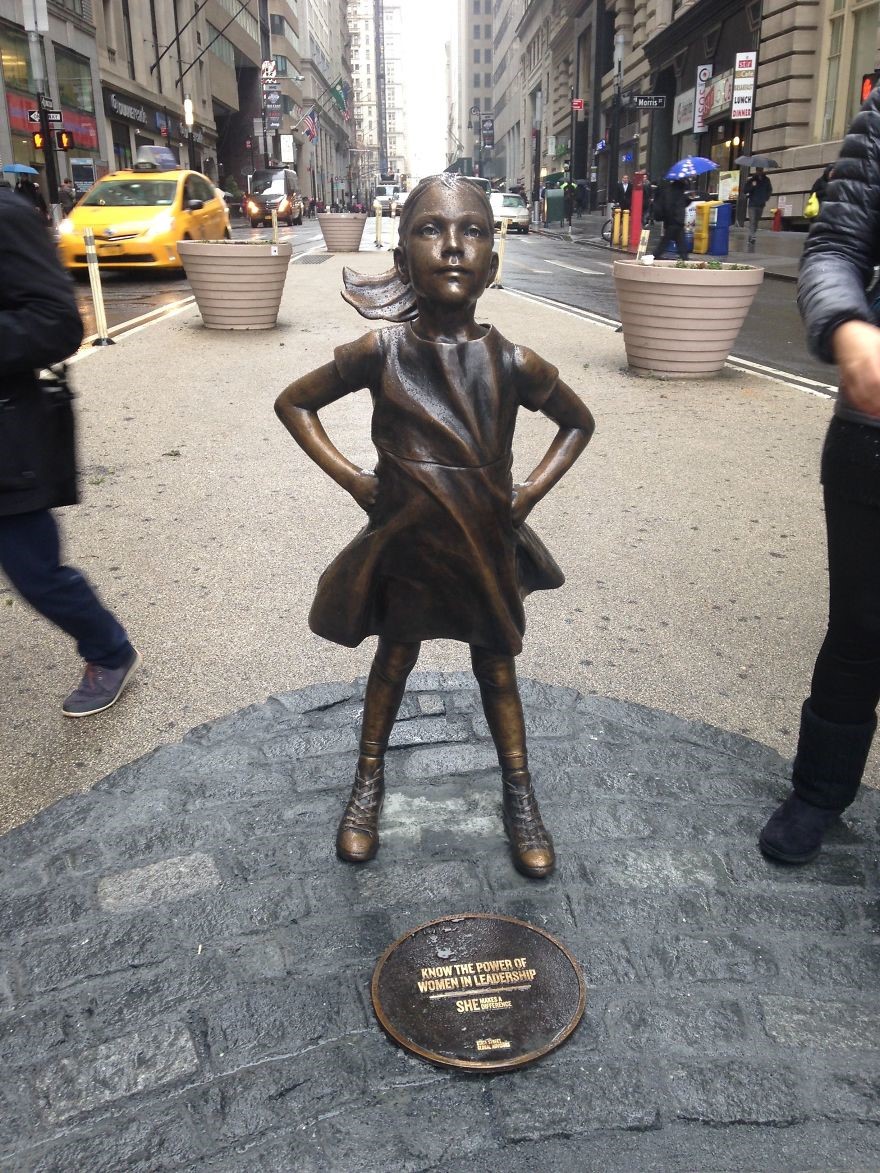 Fearless Girl, by artist Kristen Visbal, faces down the bull, her dress and hair windswept as if by the breath of the beast, her chin raised in defiance. Fearless Girl is already a sensation, taken a symbol of the strength of women, and clearly opposed to the capitalistic forces the bull symbolizes. She gets humped by a (presumed) finance bro, who is met with viral outrage. Here she wears a pink knitted pussyhat, a symbol of the recent Women’s March; the fearless girl is being claimed by the left. She resists. She surely persists. 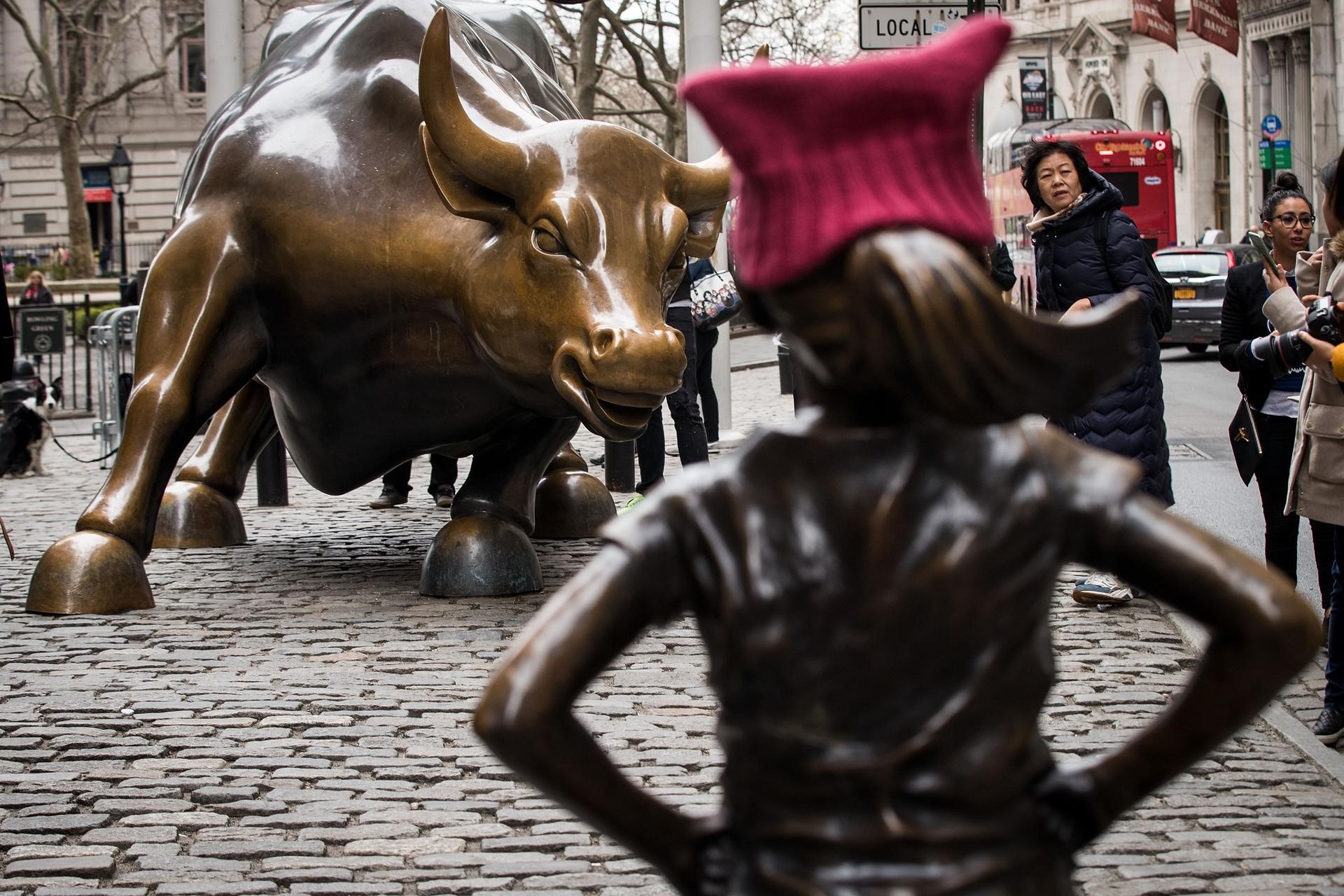 But wait. The plaque at her feet reads “Know the power of women in leadership.  She makes a difference.” Launched ahead of International Women’s Day, it’s a well-timed piece of corporate art, sponsored by State Street Global Advisors, an investment group promoting the leadership of women in finanical institutions. They have a permit for one week, already extended to thirty days.

The girl is an ad. You might as well be moved by a commercial for Folgers.

If you’re like many people who initially saw the statue, you might feel as if your reaction is cheapened by the knowledge that it’s corporate art. You were played by a latter-day Don Draper. For how can the statue embody the nebulous anti-Wall Street spirit of the times if it’s been planted there by the very corporate and financial interests she appears to be fighting? 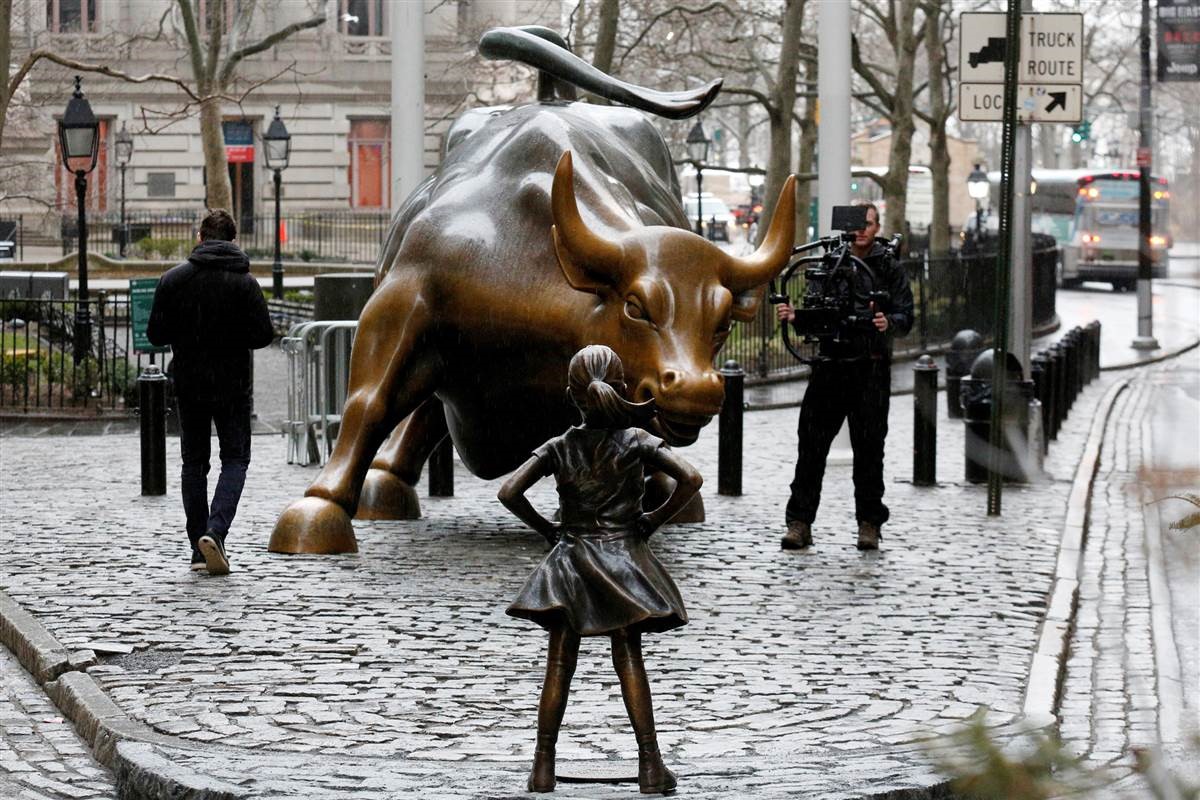 Yet perhaps that’s too quick. Her story isn’t finished. Suppose the installation is removed after a week, purchased by a collector, and placed in a museum. You’ll read about her creation on the small placard in the cool white gallery. Fearless Girl (2017) is a curiosity, a brief triumph of exceedingly clever marketing in an Instagrammed age where the best publicity is viral astroturf.

But for now, she remains public art, and the street is her gallery. The passersby are the docents and patrons, and they will decide what she ultimately means. Suppose she stands in the park for years, so that her placement in the park was a corporate stunt fades from memory. We don’t remember that Wall Street hated the bull at first, that they towed it away. It’s hard to remember when it wasn’t there.

Hundreds of thousands of visitors snap photos of their daughters next to her, arms akimbo; they give her hats and scarves; they take selfies; they link their arms with hers. They face down the bull with her. Tourists ruffle her hair for good luck and her crown shines gold.

She’s always been there in New York, hasn’t she?

Notes on the Contributor

Mary Beth Willard is Assistant Professor of Philosophy at Weber State University. She works in metaphysics, aesthetics, and early modern philosophy, and has particular interests in street art.