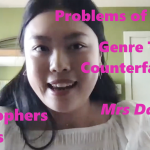 If you missed the previous workshop (schedule here), you’re in luck! We recorded it! You can watch the whole thing below or on YouTube. The order of presentations is included below with timestamps. (Also, if you missed the first and second workshops, the videos are available here and here.)

Abstract: According to the Genre Theory of Fiction (Friend 2012), there are no essential features distinguishing fiction from non-fiction; in particular, there is no necessary connection between non-fiction and accuracy or the invitation to believe. A frequent criticism of the theory is that it undermines the justification for criticizing works of non-fiction that play fast and loose with the facts. I defend the Genre Theory from this objection, arguing that it misidentifies the justification for criticizing misrepresentations in non-fiction (as well as fiction).

Abstract: When we evaluate artworks, we often consider hypothetical variations of those works in order to make judgments of the works as they actually are. We might, for instance, say of Kara Walker’s enormous sugar sphinx A Subtlety, “The effect of the sculpture would completely change if it were made out of clay, plaster, or even some other edible substance like chocolate.” Call this counterfactual reasoning in art criticism. I argue that counterfactual claims about artworks involve a special kind of comparative judgment between actual and hypothetical works of art. I show why counterfactual reasoning in art criticism puts pressure on the acquaintance principle, as it involves aesthetic judgments about hypothetical artworks one has not actually perceived.

Abstract: Near the beginning of Virginia Woolf’s Mrs Dalloway, Clarissa Dalloway walks past St James’s Park and becomes caught up in observing the liveliness of the traffic and people around her. In a complex passage, Clarissa proclaims that ‘she would not say of any one in the world now that they were this or were that’, that ‘what she loved was this, here, now, in front of her’, and that ‘it was very, very dangerous to live even one day’. I offer a reading of this passage that uses Edmund Husserl’s notion of a ‘horizon’ to tie these disparate feelings together.

Thanks to everyone who presented and attended this series! We hope it helped your socially distanced, all-conferences-canceled summer be a little more fun and interesting.