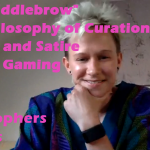 If you missed the previous workshop (schedule here), you’re in luck! We recorded it! You can watch the whole thing below or on YouTube. The order of presentations is included below with timestamps. (Also, if you missed the first workshop, the video of that is available here.)

00:00 – “The Middlebrow: An Articulation and Defense”
Jonathan Weinberg (University of Arizona)

Abstract: I articulate a notion of the middlebrow in art, and defend both the utility of the category as a term of criticism, as well as the legitimacy of much of the art that will fall under it. The core idea is that middlebrow art lies at the troubled intersection of accessibility and aspiration. It is designed to be consumable by at least a moderately broad swath of the public, and thus includes many instances of what Carroll has theorized as “mass art”. Yet a middlebrow work will also be designed to aim for higher terms of success than popular art on the whole.

Abstract: What constitutes an exhibition? In this illustrated talk, I will argue that an exhibition is not constituted solely of objects in a space, but of objects in a space associated to a curatorial narrative. This has important consequences, namely that the same exact ensemble of objects in the same spatial disposition can be a multiplicity of exhibitions. As a philosopher and curator I experimented with the consequences of this idea in three instances, curating a second exhibition within an existing one, simultaneously curating three exhibitions myself and curating three exhibitions with multiple authors. Each work was contextualized differently three times on each occasion.

Abstract: There is a close connection between clowning and satire. According to Declercq (2018), critique and entertainment are jointly necessary and sufficient conditions for satire. I argue that while many instances of clowning rely on critique and entertainment, these are not sufficient for clowning. There is an additional property that clowns must share that is not required for the satirist, namely the notion of ‘flopping’. In order to highlight this, I compare John Oliver to Sacha Baron Cohen as a test case. I aim to show that while both are satirist, only Cohen is a clown.

1:02:05 – “For Voyeur Gaming: Why It’s OK to Just Watch, Rather Than Play”
Nathan Wildman (Tilburg University)

Abstract: The phenomenon of voyeur gaming, in the form of watching Let’s Plays and Twitch streams, is often dismissed as silly. Why, say objectors, do you want to just watch somebody else play video games, instead of simply playing yourself? My aim here is to sketch a response to this objection. Specifically, I argue that different forms of LPs have different aesthetic focal points, which support distinct explanations for wanting to watch them. The upshot is that voyeur gaming is (or can be) as aesthetically valuable as watching sport, listening to stand-up, going to a museum, or engaging with a new work of art.

Abstract: What do the following works have in common? The musical Hamilton, Christopher Nolan’s Batman flicks, Lady Gaga’s music, Cirque du Soleil, the novel Gone Girl, Quentin Tarantino’s films, and sitcoms like Seinfeld, Arrested Development or Community. This is a very diverse list, but they all share one important feature: They are trying to appeal to both the most discerning highbrow audiences and the broadest possible lowbrow audiences. This is what I call crossover culture and I argue that it is the most important cultural trend of our times. It is a very different way of combining highbrow and lowbrow than the widely analysed and universally disdained middlebrow. And we can understand a lot about our culture (and society) if we understand crossover culture.

If you’d like to attend future workshops: go here and give us your name and email. Please join us – the more the better!