As lockdowns start to release us back into the world, this series is coming to a close. For the very last term of art, I thought it fitting to discuss a very popular but not super well understood term: 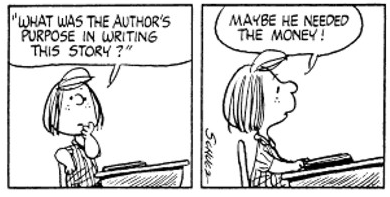 Barthes: “Who cares what he needed!
PEPPERMINT PATTY IT DOESN’T MATTER”

Definition: “The birth of the reader must be at the death of the author.”
This is the last line of French literary theorist Roland Barthes’ famous essay “The Death of the Author”.

What does it mean?

So, okay, Barthes thinks that we now (= under capitalism) care way too much about the author. We have to care because we have to know who to give money to. And this leads us to think that authors are the true dictators (the gods) of a text’s meaning. So we get obsessed with authors. We don’t just read Alice in Wonderland. We have to know what Lewis Carroll’s personal life was like. Was there a real-life Alice? What was his relationship to her? What other things was he interested in? What were his hobbies? What was his childhood like? And on and on.

And we can extend this beyond literary criticism. We don’t just listen to a Taylor Swift song. We have to know: is it about Harry Styles? Or Kanye? What year was she born? What are her political views? her favorite colors? her cats’ names? Is there some subtext we should look for?? What does she MEEAAANN???

Literary (and art) criticism, if you go down this path, just becomes biography. We try to figure out what a text means by figuring out what the author of the text meant by it, which means doing a lot of biographical research.

Enter Barthes. He says no! Authors aren’t gods; authors need the text in order to even count as authors in the first place. (They wouldn’t even BE authors without a text.)

And texts are just words. Those words have meanings and associations that are partly constructed from other texts (think intertextuality), and are social and messy, varying from person to person. Texts are swirling, chaotic globs – and Barthes thinks that the only place that it all comes together is in a reader. And the author not a god, but merely one reader among the rest. TSwift is, after all, just like us.

Key text:
Roland Barthes, “The Death of the Author” which you can find online or in Image – Music – Text
(It is SO SHORT, if you’re curious, just go read it: here’s the scanned standard version from IMT, and here’s a different translation, also accessibility friendlier.)

Related terms:
New Criticism – a 20th century literary criticism movement, according to which the text itself is the only thing that matters (closely connected to formalism!)