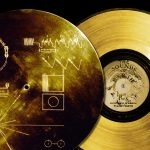 Artwork: “Dark was the Night, Cold Was the Ground” by Blind Willie Johnson (Columbia Records, 1927)*

Greater the feeling
that in the waters of the heart
stays seething deep below,
and never rises into words,
than that which can be spoken.

Johnson evokes such a feeling struggling to be expressed; a yearning, a weariness, a melancholic acceptance of the inevitable. We sent this song to the stars. The emotion here resisting articulation may thus outlast any human who may ever give it words, just as it outlasted Johnson himself. I imagine it drifting away into the black, empty silence, eternally as yet unspoken.

*This song is one of 27 pieces of music on the Voyager Golden Record that was included on the space probe Voyager 1 launched in 1977. It is currently beyond the reaches of our solar system and continuing its way through interstellar space.