This is an update to an earlier story that follows new developments in the Pepe meme story: Pepe’s death!

Faithful readers of this site will be familiar with the saga of the internet meme Pepe the Frog. (For those of you who missed it, my earlier post on Pepe and the nature and value of internet memes is here.) The latest update: Pepe’s death! But first, a bit of background:

The meme started with a character created in a comic strip by the artist Matt Furie; the cartoon frog was then appropriated by users in online communities, where it developed over time into an enormously rich internet meme. In the last year or two, the meme has come to be associated with the alt-right and white supremacy; last fall, the Anti-Defamation League added it to their catalog of hate speech.

Until pretty recently, Furie had largely stayed out of making public pronouncements about Pepe’s racist associations. In a September 2016 interview, he told The Atlantic:

My feelings are pretty neutral, this isn’t the first time that Pepe has been used in a negative, weird context. I think it’s just a reflection of the world at large. The internet is basically encompassing some kind of mass consciousness, and Pepe, with his face, he’s got these large, expressive eyes with puffy eyelids and big rounded lips, I just think that people reinvent him in all these different ways, it’s kind of a blank slate. It’s just out of my control, what people are doing with it, and my thoughts on it, are more of amusement.

However, as the meme began drawing greater public attention, Furie decided to get involved. He began a “Save Pepe” campaign, the goal of which was to create and share “nice” images of Pepe. I suggested that Furie’s move implicitly recognized his lack of control over the meme. The only way to save Pepe, I argued, was not through authorial pronouncement, but rather practically; users would have to roll up their sleeves and get involved in the business of making and sharing Pepes.  By creating and propagating nice Pepes, they could gradually shift the standards of what counts as a Pepe, and move the meme’s meaning away from its current association with the alt-right.

So how successful was this campaign? Not very. Pepe remains the symbol of the alt-right, and the effort to save Pepe never really caught on. It’s hard to know exactly why. Perhaps it wasn’t well-publicized. Alternatively, the top-down nature of the campaign might have rubbed users the wrong way.

Regardless of its cause, this failure frustrated Furie. As a result, the artist recently “killed” Pepe; he released a comic strip featuring Pepe, dead in a casket, surrounded by his friends: 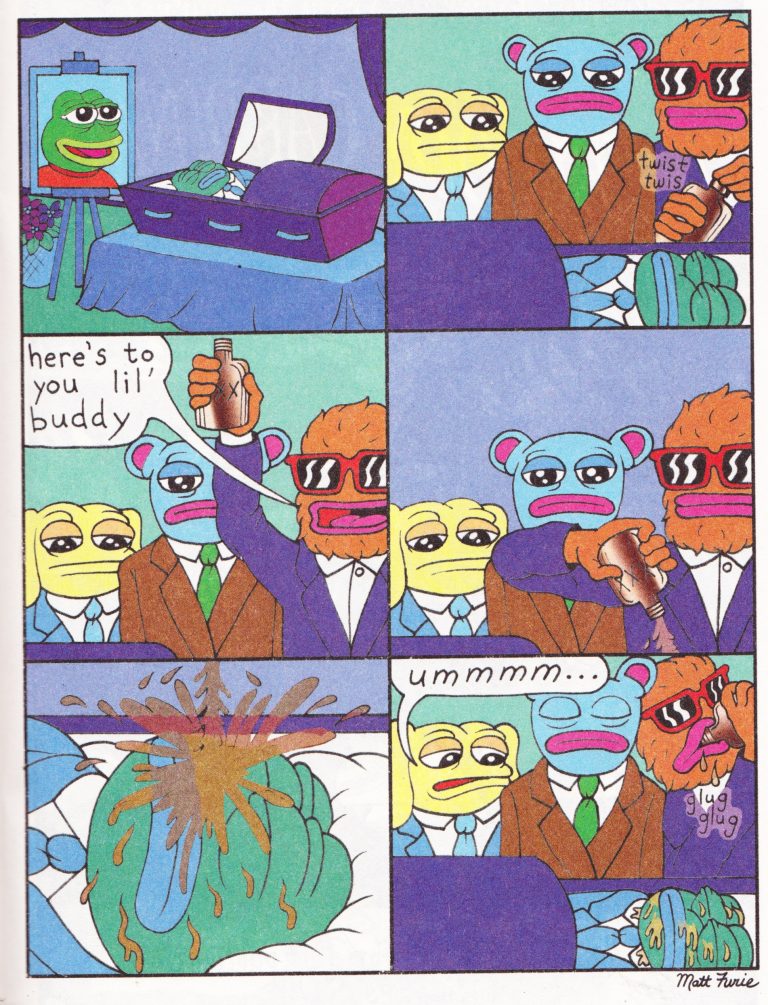 What should we make of this? Furie’s killing of Pepe doesn’t mean much for the future of the meme itself. As I argued previously, Furie doesn’t own the meme or have authorial control over it — even if he is responsible for the cartoon character who initiated it. The meme itself is a set of norms implicit in community practice, and the meme is therefore the property of the community responsible for its instances.

I think that, instead, we should view Furie’s act as expressive of his giving up on the meme; he is symbolically removing himself from the community of individuals creating and propagating instances of the meme. Pepe isn’t truly dead as a meme — but the meme is, for now, dead to Furie.

Furie’s action raises larger questions about the value of participation in particular internet memes: When is it worth it to stick with a meme and to try to save it from trolls who’ve taken it over? With most memes, the natural response would be to give up and shift one’s attention to new memes; generally, memes are evanescent things, with a half-life of weeks if not days. Pepe strikes me as different: given Pepe’s rich history and broad impact, it might seem worth fighting to reclaim the meme as part of our internet culture. (I suspect that similar questions arise in determining which artworks and cultural objects to preserve or restore against the ravages of time.)

Furie seems to recognize this, and even goes so far as to claim that the fight for Pepe may not be over for him. In a recent interview with the CBC, Furie pleaded for Pepe’s future and held out the possibility of his returning to the meme:

If you’re listening to this and you’re interested in the story — and especially if you have some kind of political sway or anything like that — like, step in and, you now, just tell your friends, neighbours, teachers, whoever else that Pepe is a chill, loving frog. Every moment is an opportunity to change people’s opinion, so I’m not gonna give up yet, but I’m gonna take a break, because it is some heavy stuff.

Notes on the contributor:

Anthony Cross is a Lecturer in Philosophy at Texas State University. His research in the philosophy of art focuses on the ethical significance of our relationships with artworks and other cultural objects. He has further research interests in ethics and the history of philosophy, and he also spends way too much time on the internet.