December 6, 2019
by Aesthetics for Birds
4 Comments

This year marks the end of the second decade of the 2000s. In honor of this, we thought we’d take a look back at our decade with an end-of-year series. The internet loves lists, especially year-end ones, and we’ll feed that love a little bit this December. We’ll be hosting seven lists of expert Decade-Best picks. We’ve done movies, and you can look forward to writing, television, music, traditional visual arts, and one surprise list at the end. Each will include philosophers working in these and related areas, but also other academics whose work concerns these topics and people working in the relevant media. But up today: games! We asked our experts to rank their top five games of all kinds, so let’s see what the 2010s gave us to play with. Our contributors are: Christopher Bartel, professor in Philosophy at Appalachian State University Thi Nguyen, associate professor in Philosophy … Continue reading → 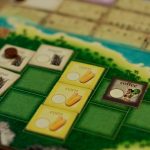 In a recent New York Times article, journalist Kevin Draper brings us up to date on some recent controversies in the world of historical board games. The article centers on the cancellation of Scramble for Africa, a historical board game which was to let players take the role of European powers exploring and exploiting Africa, trying to get the most resources. Joe Chacon, the designer of Scramble for Africa, was accused of not treating this situation with appropriate seriousness. In his game, the savagery that was part and parcel of that exploration seems to be dealt with in minor and trivializing ways. The players must put down rebellions, and can slow their opponents by inciting native revolts. Random events include “penalties for atrocities” and rewards for ending slavery. Butchery is gameified. The article raises a number of fascinating questions. What are the ethics of gaming history? Can we ever gameify our troubled past, and … Continue reading →