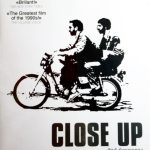 Words: Abbas Kiarostami’s Close-Up employs a unique mixture of “documentary” footage of a trial and dramatization of the events leading up to the trial (as well as its redemptive aftermath) with the real-life characters. A seemingly simple story of impersonation and fraud (when Kiarostami asks to film the proceedings, the trial judge tells him detachedly that “there’s nothing about this case worth filming”), and a very simple narrative conceit, develops into rich reflections about art, identity, and powerlessness. I particularly love how its felicitous ending is made possible by the making of the movie itself—a documentary that creates itself.