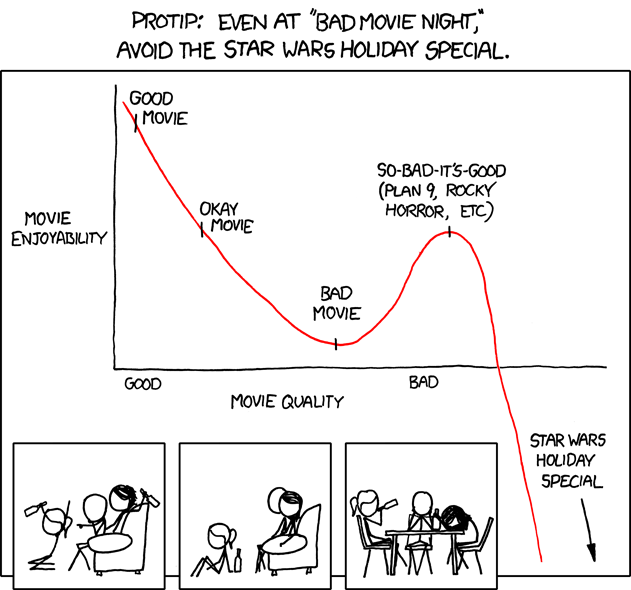 John Dyck (CUNY Graduate Center) and Matt Johnson (Millersville University) have recently co-authored a paper for the Journal of Value Inquiry that answers this question.

One possible answer they consider in the paper, and in a piece recently published at The Conversation, is that we are sort of awful people because we just enjoy others’ failings.

Our pleasure, say, at MoBA [the the Museum of Bad Art], is a particular kind of schadenfreude – the German word for taking joy in another’s misfortune. This view doesn’t have an official name, but we could call this “the massive failure view.” (The great Canadian humorist Stephen Leacock held this view, arguing that singer Julia Moore’s earnest ineptitude made her work funnier.) If this view were right, our enjoyment of “The Room” would be morally suspect; it’s not healthy to get our kicks from the misfortune of others.

First, it doesn’t feel like we are enjoying pure failure in works like “The Room.” Our enjoyment seems to go much deeper. We laugh, but our enjoyment also comes from a kind of bewilderment: How could anyone think that this was a good idea?

On his podcast, comedian Marc Maron recently interviewed Franco about “The Disaster Artist.” Maron was a little uneasy about the film; to him, it seemed as if Franco were taking a gleeful delight in Wiseau’s failure.

But Franco resisted this: “The Room” isn’t just great because it fails, he explained; it’s great because it fails in such a confounding way. Somehow, through its many failures, the film totally captivates its viewers. You find yourself unable to look away; its failure is gorgeously, majestically, bewildering.

Second, if we were just enjoying massive failure, then any really bad movie would be good-bad art; movies would simply have to fail. But that’s not how good-bad art works. In good-bad art, movies have to fail in the right ways – in interesting or especially absurd ways.

Some bad art is too bad – it’s just boring, or self-indulgent or overwrought. Even big failures aren’t enough to make something so bad it’s good.

In the paper, John and Matt write:

So why is some art so bad it’s good? Well, it’s not exactly that it’s so bad it’s good, but that it’s bad in a certain way that is consistent with and integral to its being good. Back at the Conversation, John says:

We argue that good-bad artworks offer a brand of bizarreness that leads to a distinct form of appreciation.

Many works – not just good-bad artworks – are good because they are bizarre. Take David Lynch’s films: Their storylines can possess a strange, dreamy logic. But good-bad art offers a unique kind of bizarreness. As with the films of David Lynch, we’re bewildered when we watch “The Room.” But in Lynch’s movies, you know that the director at least intentionally included the bizarre elements, so there’s some sense of an underlying order to the story.

In good-bad art like “The Room,” that underlying order falls out from beneath you, since the bizarreness is not intended.

This is why fans of good-bad art strongly insist that their love for it is genuine, not ironic. They love it as a gorgeous freak accident of nature, something that turned out beautifully – not despite, but because of the failure of its creators.

For the academic insiders among you, this means that John and Matt end up using “good-bad art” to separate aesthetic value from artistic value. From the paper:

Artistically, works of good-bad art are failures. But failures give rise to bizarreness, which has positive value aesthetically yet not artistically. Indeed, such works have positive aesthetic value at least partially because of their negative artistic value.

Those interested in these issues should check out John’s piece at The Conversation, and the original co-authored piece in Journal of Value Inquiry. (Those without institutional subscriptions can write to the authors for a copy.)