Philosopher John Rapko reviews recently published Art in the Making: Artists and their Materials from the Studio to Crowdsourcing by Glenn Adamson and Julia Bryan-Wilson

A peculiar characteristic of contemporary art is that it is accompanied by an enormous amount of talk from artists, curators, and academics about its distinctive features, both what they are and what they should be. A widely shared assumption of such talk is that contemporary art is marked by the acceptance of Marcel Duchamp’s invention of the readymade as an art-making strategy. A readymade is not so much made as chosen: the artist starts with an idea or concept, and then chooses some object to which the idea is attached. The artist’s creative activity is focused on articulating the idea and scanning the world for a suitable vehicle. How, then, could such a narrow conception of artistic activity give rise to the great range of practices in contemporary art? 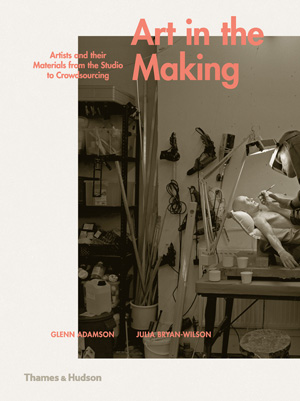 In order to indicate the scope of artistic making in contemporary art, the authors introduce the term ‘production’. For them the term is extraordinarily capacious; it comprises what is traditionally called the ‘creative process’ (a phrase that does not occur in the book) of conceiving, designing, and fabricating a work, as well as any relevant social processes, such as seeking funding. The authors cite Karl Marx’s early characterization of production as “weaving, spinning, drilling, turning, building, shoveling, stone breaking” to show the level at which basic activities of ‘production’ occur, and to signal explicitly their “commitment to materialist approaches” (p.16). Most of the book is devoted to short descriptions of and reflections upon recent art works. The ten chapters range from ‘Painting’ through ‘Performance’ to the most recently emergent topics of ‘Digitizing’ and ‘Crowdsourcing’. The authors regularly note the points at which a work responds to the contemporary ‘expanded’ condition of the arts. For example, they claim that a characteristic of performance is ‘support’, the ways in which any isolated action of a single agent actually relies upon broad intersecting social networks (p.95).In Art in the Making, Glen Adamson and Julia Bryan-Wilson argue that the readymade is the fundamental model in contemporary art. However, recent developments, particularly the widespread acceptance of collective art-making, have stressed the model to a near breaking-point. Much prominent contemporary art is ‘fabricated:’ one or more artists detail how the work should be made, and artisans and fabricators make the artifacts that comprise the material dimension of the work. Why should such collective authorship stress the model of the readymade? Adams and Bryan-Wilson point to conceptual and social factors that undermine its intelligibility. First, the acceptance of the readymade implies that ‘anybody is/can be an artist’, for after all who can’t point at an object and say ‘I hereby declare thee a work of art’? The problem with this, the authors suggest, is that the readymade is a late outgrowth of the Romantic-modern conception of the artist as a ‘genius’. The social function of the genius model is to secure the conception of the artist as the primary source of a work’s meaning, value, and significance. The social factor is that contemporary works of art are now part of what Rosalind Krauss termed an ‘expanded field’, which the authors also alternatively refer to as ‘the broader environment’ (p.73) or ‘wider cultural matters’ (p.94).

The authors seem to have in mind such ‘material’ networks and practices as food production and distribution, cleaning, maintenance, and transportation. Once artworks are made in ways that acknowledge the contemporary ‘expanded’ condition, unnoticed or marginalized aspects of the work’s making can and sometimes do enter into the work’s content. The authors claim that there is a broad “problematic relationship between art and value” (p.15). Three kinds of value are explicitly noted. First, there is ‘material value’, the buying and selling price of the materials incorporated into a work. Material value has arisen as an issue due to the recent use of spectacularly expensive materials, most notoriously in Damien Hirst’s diamond-blanketed skull. Second there is the market price of the finished work, a value ultimately determined by the degree of social recognition of the artist’s alleged genius (p.141). The first two kinds of value are simply aspects of price, and so are conceptually distinct from a third kind that would usually be referred to as ‘artistic value’ (a phrase that does not occur in the book). The authors’ reference to this third kind are so brief and obscure that it’s unclear what conception of artistic value they hold, but some indications are given: it’s what gives a painting its potential to subvert the practice of painting conceived in terms of medium-specificity (p.34); it makes some works ‘compelling’ (p.208); when it is embodied in a work, the work becomes ‘potent’ (p.217).

The argument of the book, then, seems to be this: Contemporary art is constituted in part by the broad acceptance of the strategy of the readymade as the core model of art-making. This model is bound to the continued acceptance of the artist as genius, that it is social recognition of the imaginative powers of a particular individual that gives that individual’s works whatever meaning, value, and significance they have. The recent and growing prominence of multiple authorship, fabrication, and crowdsourcing serves to undermine the appeal to individual genius. So artistic value in contemporary art is uncertain, at least in orienting our understanding of multiply authored works and those that are seemingly individually authored (since individual authorship is in any case an illusion).

This summary of the argument is distant from the experience of reading the book which is dominated, as noted above, by brief discussions of individual works. Since the authors aim to present “the full spectrum of sites of production” in contemporary art, these discussions of particular works are necessarily so brief (usually a couple of paragraphs, and rarely more than three or four) that the accounts seem arbitrary. For example, in the two short paragraphs on the work of Josephine Meckseper, they note that some critics have characterized her works as “mind-numbingly obvious”. They immediately counter with the suggestion that “the mind-numbing effects of hyper-commodification are precisely what concern her.” No further evidence or argument is given in support of their interpretation other than noting that she does indeed recycle “the cliché [sic] tropes of luxury display” and that this somehow “strikes right at the heart of artistic authorship” (p.148). Perhaps the nadir of the book is their discussion of Robert Smithson’s ‘Spiral Jetty’. They ignore the volumes of literature on the piece, as well as Smithson’s own conceptualization of the work, to simply assert that despite the work’s great complexity, it “was at the most basic level a deployment of equipment normally used to clear a lot and lay a foundation” (p.74) It would be tedious to clarify the various conceptual obscurities here. The occasional citations of authors ranging from Karl Marx (p.16) to the anthropologist of art Alfred Gell (p.37) to the contemporary art historian Rosalind Krauss (p.12) are wholly perfunctory and at best play no role in the larger argument. This is particularly frustrating with regard to Gell, who had advanced a sophisticated and controversial anthropological account of art involving the consideration of networks of makers and users in his book Art and Agency (1998). In their concluding chapter the authors suddenly claim that the subject of ‘distributed authorship’ has been present throughout their book, and that this condition is pervasive in contemporary art (p.223); but, though they have earlier cited Gell, they do not so much as mention his attempt to demonstrate that this subject is also pervasive in, among other things, the arts of the Trobriand Islanders kula, famously studied by Bronislaw Malinowski. Is this condition, then, only pervasive in contemporary art?

Aside from hoping to gain a superficial familiarity with a broad range of recent art, one might read the book as a stimulus for reflection on the remaining force, if any, of the Duchampian model of the readymade in contemporary art. It seems to me, though, that the authors bungle this possibility because they lack any articulate conception of what one might call ‘the appreciative focus’, or what artists are offering for participation, perception, and/or reflection. A distinction of contemporary ‘visual’ art could be that the focus of appreciation is given less through a viewer’s visual perception and more through participation in tasks set by artists. Perhaps contemporary visual art is connecting with ‘wider cultural frames’ by becoming integrated or re-integrated with architecture, dance, and participatory spectacles.

Lacking anything equivalent to the notion of an appreciative focus, the authors cannot resolve the issues they set forth. A particularly damaging consequence of this is their inability to say what the content of a work is. Since on their account it is a consequence of the model of the readymade that the ‘pre-artistic’ processes out of which the artifact arises are part of the content of the work, they have no principled reason for not including in a painting the making of its frame, the cutting of the tree, the making of the saw to cut the tree, and so on infinitely. Put bluntly, the authors need to go back to school to learn the relevant basic conceptual points. But since they themselves are among the most sophisticated writers on contemporary art, and one is a prominent and high-level academic, who shall educate these educators?