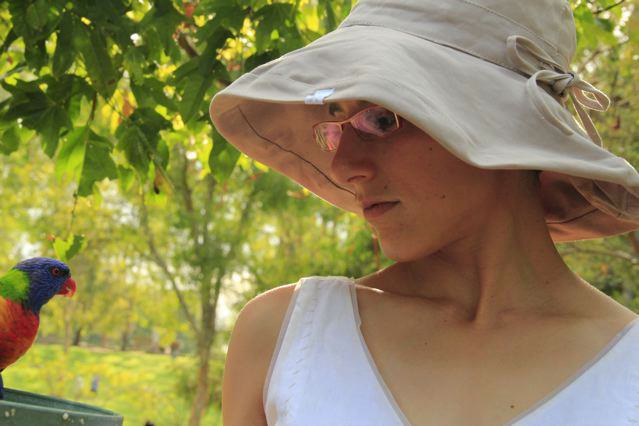 R.A. Briggs is a philosopher and a poet. She has been a Research Fellow at the Australian National University and at Griffith University since 2012. She has published widely on issues in metaphysics, epistemology, and decision theory. Her poetry has also been published many venues, but you can get a lot of it in one place in her book, Free Logic, which won the 2012 Thomas Shapcott Poetry Prize for emerging poets in Queensland and was shortlisted for the 2014 Queensland Literary Award in the poetry category.

I do think formalizing philosophy increases clarity. It’s easy to get a grip on a sentence in a formal language, because there are algorithms for testing whether it’s grammatical, whether it’s valid, and whether it follows from a given set of premises. (Incidentally, there are also algorithms for testing whether a poem obeys formal rules. Consider these two gorgeous twitter bots: anagramatron, which trawls for tweets that are anagrams of each other, and pentametron, which trawls for pairs of tweets that form rhyming couplets in iambic pentameter.)

But in formal philosophy, the added clarity comes with risks.  Suppose I want to ask a philosophical question about a real situation: whether a vague cloud is indeterminately the same thing as a precise collection of water droplets, or whether I can reasonably prefer allocating something indivisible based on a coin flip over giving it to my favorite person, or whether Shakespeare’s plays might never have existed.  You can translate each of those questions into a formal language that forces a “no” answer.  But then you have to worry about whether the original question has survived the translation.  Maybe you achieved clarity only by changing the subject.

I don’t think that either the risks or the benefits are the same for formal poetry. The point of technical demands in poetry is often beauty, rather than clarity.  Rhyme and meter caress the ear; good use of white space draws the eye; Oulipan lipograms dazzle the mind with their cleverness.  These constraints are not really about content, but about mode of presentation.  If anything, they present impediments to clarity, since there are fewer ways to get a message across beautifully than to get the same message across full stop.

Some kinds of technically demanding poetry do use constraints that are tied to their content.  The choice of constraint can carry meaning—two good examples are Warsan Shire’s “Backwards”, which uses a symmetric form to convey the idea of reversing time, and Harry Giles’ “The Following Content is Acceptable”, which signals that it is a sarcastic takedown of the recent UK anti-pornography bill by “censoring” the text of the a blog post about the bill.  A formal constraint can also signal connection to a larger genre or tradition—Agha Shahid Ali’s English-language ghazals are self-consciously connected to a tradition that runs through Arabic, Farsi, and a wide variety of other languages.

The form that’s probably closest to formal philosophy (in both its strengths and its weaknesses) is the sonnet, whose rules include constraints on logical structure.  Stereotypical sonnets include a volta—a change in perspective—between the first eight lines and the last six.  (Some Shakespearean sonnets cram the volta in between the first twelve lines and the final couplet, but it’s still there.)  The rhymes in a stereotypical sonnet also mark out divisions of meaning: groups of lines that are connected by rhyme are about the same subject matter.  Translating a thought into sonnet form can be a way of clarifying it, like translating an argument into premise-conclusion form.  But not every thought is naturally sonnet-shaped. 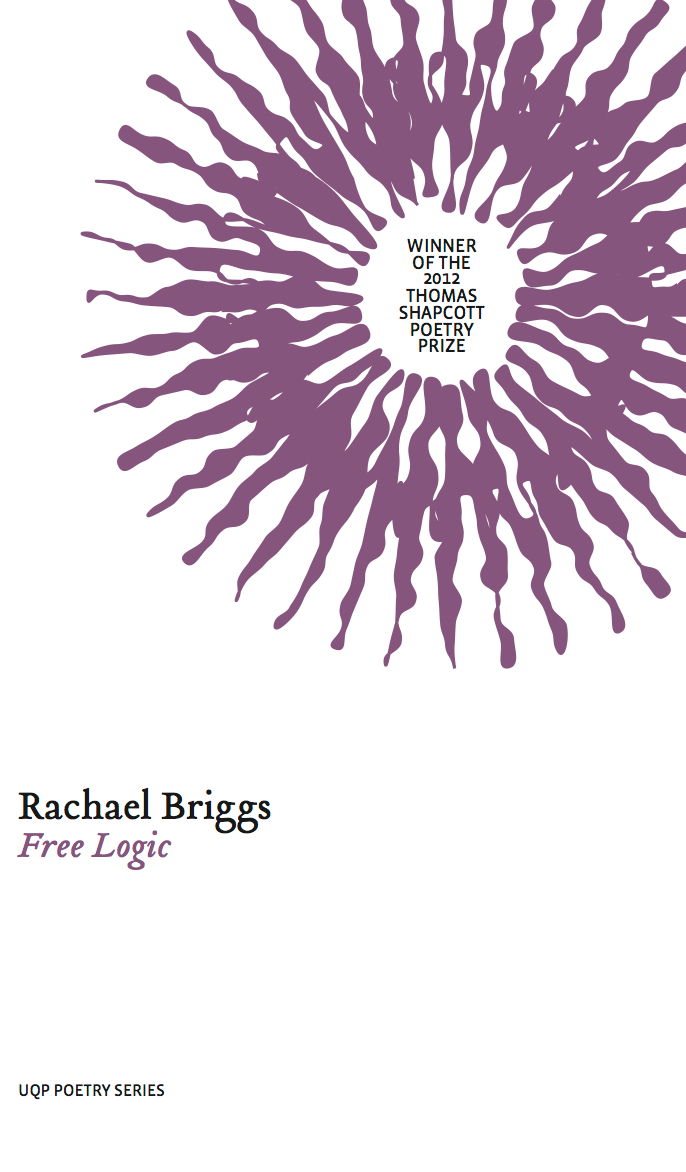 In addition to writing poetry, you do a fair number of poetry performances. What do you think is the relationship between the written poem and the spoken one(s)?

Great question.  If I write down a poem and then perform a very similar poem (consisting of the same words in the same sequence), how many works of art did I create?  Is there just one thing, the poem, which can be conveyed in different ways?  Or are there two things, the written poem and the spoken poem?  Or are there more than two things: the poem as performed for a drunk slam audience; the poem as performed for a sober audience at a Sunday community event; the poem as bungled by a nervous performer; the first draft of the poem scrawled in a notebook; the final draft of the poem published in a journal…?

While we’re talking about text and performance, I wonder what you think about the relationship between written philosophy and performed philosophy, whether it’s class lectures or research talks. Do you think it’s similar in any way, or completely different?

I think the two kinds of performance are very similar.  They require similar skills from me: voice projection, eye contact, a certain amount of memory work, rehearsing efficiently, thinking carefully through the reasons for what I’m saying.  They have similar benefits: I think better when I know that I’ll have to present things for an audience.  And they feel similar: it makes me really nervous to stand in front of a room full  of people and talk, but I also love being able to gauge people’s responses in real time.  It’s too bad that there’s no poetry analogue of a philosophy Q&A; I think my favorite thing about philosophy talks is getting to do a little jam session at the end, where new philosophy is created.

Do you have particular processes you go through when you write philosophy or poetry? To what extent do you experience the writing process differently for each?

With philosophy papers, I need more discussion and planning before sitting down to write; I make more outlines; and I go through a lot more drafts.  I edit poems too, but unlike papers, most of them come out either close to done, or unfixable.  My editing process for poetry is influenced by writing a lot of philosophy—it’s very much about trying to formulate specific problems with the poem, and then generating repair strategies.

One thing that’s similar to me across genres is the value of criticism.  In poetry and philosophy, I find it hard to gauge the quality of what I’ve written unless I’m able to bounce it off another human being.  Philosophy has given me a lot of practice at accepting criticism, which is a skill that carries over to poetry.

You have some visual poetry, too, which is an interesting manifestation of the technical nature of poetry, as well as of the power of the poem as a written object rather than a performed one. What do you think is valuable about visual poetry?

The flippant answer: it looks cool.

The less flippant answer: in addition to being aesthetically pleasing, it can convey content that can’t easily be conveyed in other ways.  Consider some examples:

Forsythia, by Mary Ellen Solt, conveys not just the general idea of a forsythia bloom, but a very specific forsythia shape. That shape is impossible to convey using the sense of hearing alone (though touch might work—I think the poem would retain much of its interest if translated into braille.) 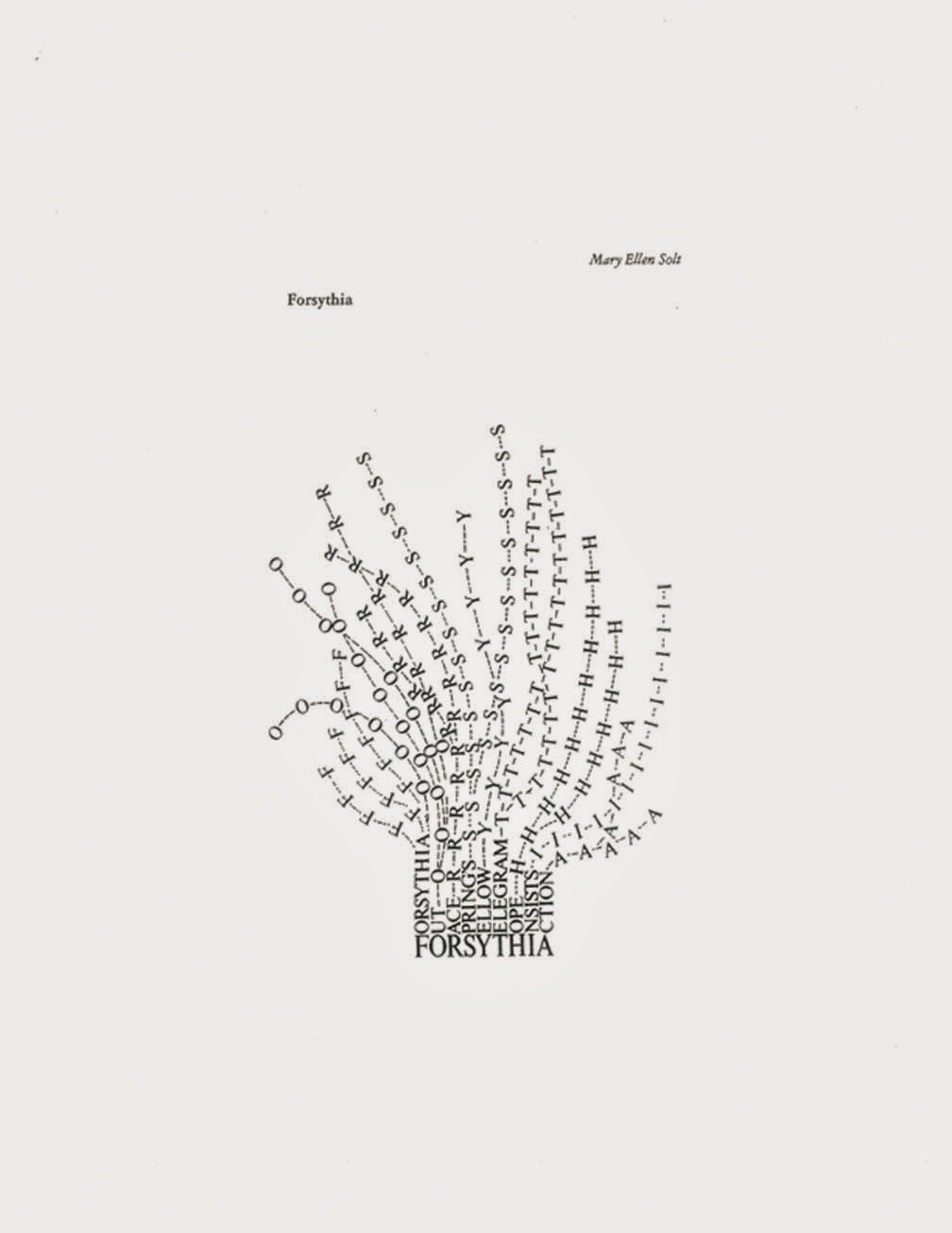 London by Elliot L. Armitage, includes a schematic map of London. There’s a sense in which the poem gives the same information in two different formats: a verbal description, and a picture. But picture makes the information feel immediate in a a way that the text alone is unlikely to do.

The webcomic A Softer World has so much in common with visual poetry that I’m going to use it for an example, even though its genre is officially “webcomic”.  Consider comic #33.

The image here is central to the joke: it conveys that the speaker is a cat, and that he or she is wearing a particular, rather eerie facial expression.  Even if you could get this information across in some other format, it would be hard to do it without spoiling the humor.

Although visual poetry has special capabilities, visual poems can be translated into non-visual formats.  (I think my ontological promiscuity helps with understanding what’s going on here.  There exist both a durable artwork that survives the translation, and a fragile artwork that does not.)  I’ve seen poets accomplish this kind of translation at festivals: a.rawlings uses pauses, strange noises, and gibberish to capture the typographic strangeness of her poems, while Shane Rhodes projects images of words behind himself as he’s reading.  So I don’t think visual poetry is separate from other genres of poetry; rather, I think visual elements are among the many valuable tools in a poet’s toolkit.

Sometimes, non-poetry takes advantage of these techniques, too. This is true of some prose fiction (Danielewski’s House of Leaves) and some non-fiction (e.g., The Talmud, Derrida’s Glas, and D’Agata’s The Lifespan of a Fact). Do you think there is anything to be gained by using these techniques in non-fiction or philosophical writing?

Absolutely!  One technique that’s common to your examples is the extensive and creative use of footnotes or other annotations. That seems like an especially promising tool for philosophy. Writing a traditional philosophical essay involves a lot of cutting out digressive passages and simplifying murky issues (for me, anyway).  Extensive footnotes could allow the reader and writer to explore more side roads, away from the main path of an argument.

But to play devil’s advocate for a moment, here’s an objection to the use of poetic techniques in philosophy: they would make philosophical writing less accessible.  Glas is a pretty obscure book.  The techniques of visual poetry pose special problems, since they are unlikely to be helpful to blind philosophers.  Gabriele Contessa argues that philosophy’s stylistic expectations already disadvantage non-native English speakers; if philosophers started to demand poetic levels of lyricism, this would make things even worse.

However, I don’t think that the objection succeeds. We don’t know that conventional methods are optimized for clarity—plenty of conventional essays manage to be both ugly and obscure.  Experimenting with poetic techniques can be done in a pretty low-risk way; unlike badly-constructed vehicles, badly-constructed essay drafts rarely kill people. Contessa makes a good case that difficult poetic techniques shouldn’t be required in philosophical writing, and I agree with him. Still, poetic techniques are permissible, and might be useful for creating worthwhile philosophy.