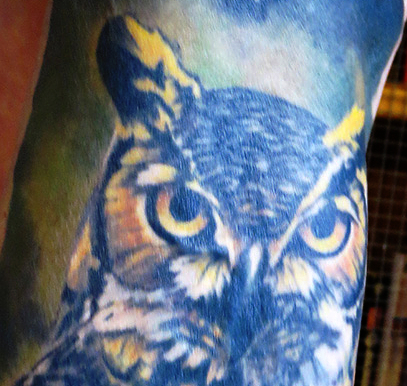 M. Dadlez is a professor of Philosophy at the University of Central Oklahoma. She received her Ph.D. from Syracuse University. She writes on issues at the intersection (often at the collision) of aesthetics, ethics, and epistemology. She has written two books on the preceding: What’s Hecuba to Him? Fictional Events and Actual Emotions (Penn State Press 1997) and Mirrors to One Another: Emotion and Value in Jane Austen and David Hume (Wiley-Blackwell 2009), as well as numerous journal articles and book chapters including “Art, Ink, and Expression: Philosophical Questions About Tattoos”, Philosophy Compass 10(11): 739 – 753. Her edited collection for Oxford University Press, Jane Austen’s Emma: Philosophical Perspectives is presently in production. Dadlez is also a feminist ethics dilettante and an occasional novelist. She has indulged in the composition of a mean-spirited academic satire (The Sleep of Reason) that lampoons higher education in America. She also draws a lot and has many tattoos of owls and foxes.

So, let’s begin with a good story about one of your tattoos.

Good story (totally cribbed from an introduction I use with my traveling tattoo presentation): I was first tempted to think philosophically about tattoos at the Rocky Mountain Ethics Congress, in a parking lot after dinner, where a Kantian informed me that he believed tattoos were immoral. “Why?” I asked, gazing at the tattooed owl on my calf appraisingly. This was a guy who also liked Babylon 5. Surely our fringe aesthetic sensibilities couldn’t be that distinct. But, in fact, they could. I was using my body as a means to an owl-depiction-exhibiting end, in violation of the categorical imperative. The Kantian eventually allowed that perhaps it was only tattooed language that was really wrong (probably on the ground that language was less likely to count as decorative). Hopping on one foot, I yanked down my sock to expose ‘Athena’ rendered in Greek lettering winding around my ankle. Although he did not say so, I believe the Kantian washed his hands of me at that point.

Hmm. Here are my initial thoughts. I think some tattoos are purely decorative and some aren’t. In fact, I think most aren’t decorative at all (in the sense that fluting on columns enhances verticality or linear patterns in a tattoo can enhance curves or tattooed mandalas can rest on the skin like necklaces). But…many tattoos are stamps, they’re not well done, and they’re not art. Many are not even good drawings. Many tattoos are intended to express an attitude or stance or affiliation in exactly the same way that a T-shirt design might. That would go for pictures as well as text. (I was seriously tempted to have “nevertheless she persisted” tattooed around my other ankle, but that’s a T-shirty impulse that I resisted.)

However, other tattoos pretty clearly can be art art, or something approximating it.

What makes a particular tattoo art, as opposed to purely decorative or expressive of an attitude, stance, or affiliation? Can a tattoo fall into more than one of these categories?

What makes anything art? There isn’t any easy answer for any category of object. And of course it can fall into more than one category. Imagine that you asked your question about drawings. What makes a drawing, or a design inscribed on a wall art? Can it be expressive of an affiliation and also art? The answer: sometimes.

You suggest that tattoos that express an attitude or stance or affiliation often aren’t art, but sometimes can be. Is there anything especially interesting about tattoos that are both “stamps”, in your sense, labelling interpersonal associations or identifications in exactly the same way a college T-shirt might, and also art?

A case where the two categories intersect? Such cases can be especially interesting because the artist has found an entirely novel way to express a very familiar idea, perhaps. In other words, such an artist might be comparable to an actor being given a stock character to play and somehow bringing amazing depth to it.  When it comes to so-called stamps, I’ve seen things that look like small dense stamps from afar that morph into an amazing three dimensional window up close, for instance, combining the compactness and limitations of a stamp with new elements.

In your piece on tattoos in Philosophy Compass, you suggest that some tattoos – especially those whose placement and content is intimately tied to aspects of the body, or part of the body, on which they appear – function as a sort of fiction. For example, a tattoo might make it fictionally the case that one has gears under one’s skin, or limbs encircled by vines. You suggest further that this can lead us to (veridically?) see the bearers of such tattoos as machinelike or entwined with nature, respectively. Is this sort of transference – from facts fictionally true of the bearer of a tattoo to facts actually true of them – unique or special to tattoos in some sense?

I think it’s the aspect of tattoos that most clearly distinguishes them from other art without thereby relegating them to the category of decoration/adornment. (It’s not always a good thing, of course, see here),

I hate using words like “transformative” because of their abuse by higher education administrators, but tattoos can sometimes quite forcibly present their bearer’s body under some particular aspect to observers. This can (disconcertingly) involve an outright optical illusion (the insect crawling across the bearer’s skin or the illusion of perforations in hollow limbs). It can, alternatively, mobilize a kind of optical metaphor in terms of which the bearer of the tattoo (and not necessarily just his or her body) is considered.

Let’s return to the role of text in tattooing. You described the idea of having “Nevertheless she persisted” tattooed on your skin as “T-shirty”. Is it the case that, generally, purely textual tattoos are less likely to be art, or aesthetically interesting, than purely image-based tattoos? And if so, how does this connect to the central role that text-image interactions have played in the aesthetics of the “traditional” Western tattooing tradition (e.g., a heart with “Mom” on a a banner, or an anchor with “unsinkable)?

Every time I think about making a generalization, a counterexample springs to mind. Some street art suggests that texts can be art (I haven’t seen tattoos like that, but that doesn’t mean there aren’t any). But I’m considering street art texts that have an image-based component. Presumably there could be tattoos that combined image and text in fruitful ways. On the other hand, typical text-based tattoos just don’t seem to me to be art, unless they’re conceptual art involving something like a bar code placement or a prime cut meat stamp.

Most of my thoughts are in the Compass piece. My own tattoos, especially the most recent ones, betray my tastes for realism and foxes and owls and Narnian verdure. I’m not sure if they qualify as art. They’re skillfully done. I now earn enough to hire people whose drawings are rather better than my own, and I’m a decent artist. So my answer is: maybe. I think placement issues could be involved in the “is it art?” question in a complicated way for tattoos. It isn’t enough that we simply have a skillfully executed drawing. For a tattoo to be art, it needs to reflect on the body in some way or another.