The full recording of our recent workshop Continue reading →

As we celebrate the endurance and ground-breaking achievements of the past thirty years, I invite you to imagine where post-revolutionary feminist aesthetics will end up in 2030, 2040, and beyond. Continue reading → 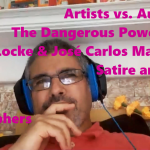 In March of this year, noted philosopher of film Dan Shaw passed away.

Now that increasing numbers of people are stuck at home and sheltering in place, I figured I’d do a little series. Every weekday for the duration of this intense period, I’ll post a short definition of some term in/related to aesthetics and philosophy of art. Let’s see how this goes! See them all here. Terms of Art #12: phenomenology

What follows is a guest post by Patrick Fessenbecker. In a recent column in The New York Times, Ross Douthat contends that English professors aren’t having the right kind of arguments. Reflecting on the analysis of the decline of the humanities in a series of essays in the Chronicle of Higher Education over the last year, Douthat makes a familiar diagnosis: the problem is that we literature professors no longer believe in the real value of the objects we study. Engaging Simon During’s account of the decline of the humanities as a “second secularization” in particular, Douthat argues that secular attempts to defend the humanities will fail just as surely as secular attempts to defend religious ethics and norms did: it doesn’t work unless you really believe in the thing. Correspondingly, the debates literary scholars are having about how to expand the range of texts and subjects we teach are … Continue reading →

What follows is a guest post by Adriana Clavel-Vázquez and Sergio A. Gallegos. Against all odds, Novohispanic nun Juana Inés de la Cruz gained widespread recognition as a writer in her lifetime. Today, she is also recognized as a distinguished Early Modern philosopher who advanced one of the earliest defenses of the right of women to be educated, and who emphasized how human knowledge is constituted by doubts and struggles. She was particularly preoccupied with the lack of recognition of women as intellectual peers, and its consequences for how women are treated.