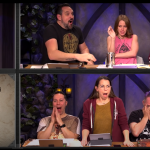 Words: Because the actors are the writers for their characters, their performances are years-long meditations on what life would be like under different circumstances, in a different world, and with different concerns. More importantly, however, Critical Role invites us to consider whether (to paraphrase Willie Nelson) our life’s love is telling stories with our friends. It is an experiment in the aesthetics of friendship in which we get to spend four hours a week embraced by the warm hug of a group of people who care deeply about and for one another, as they appreciate each other as friends and artists.