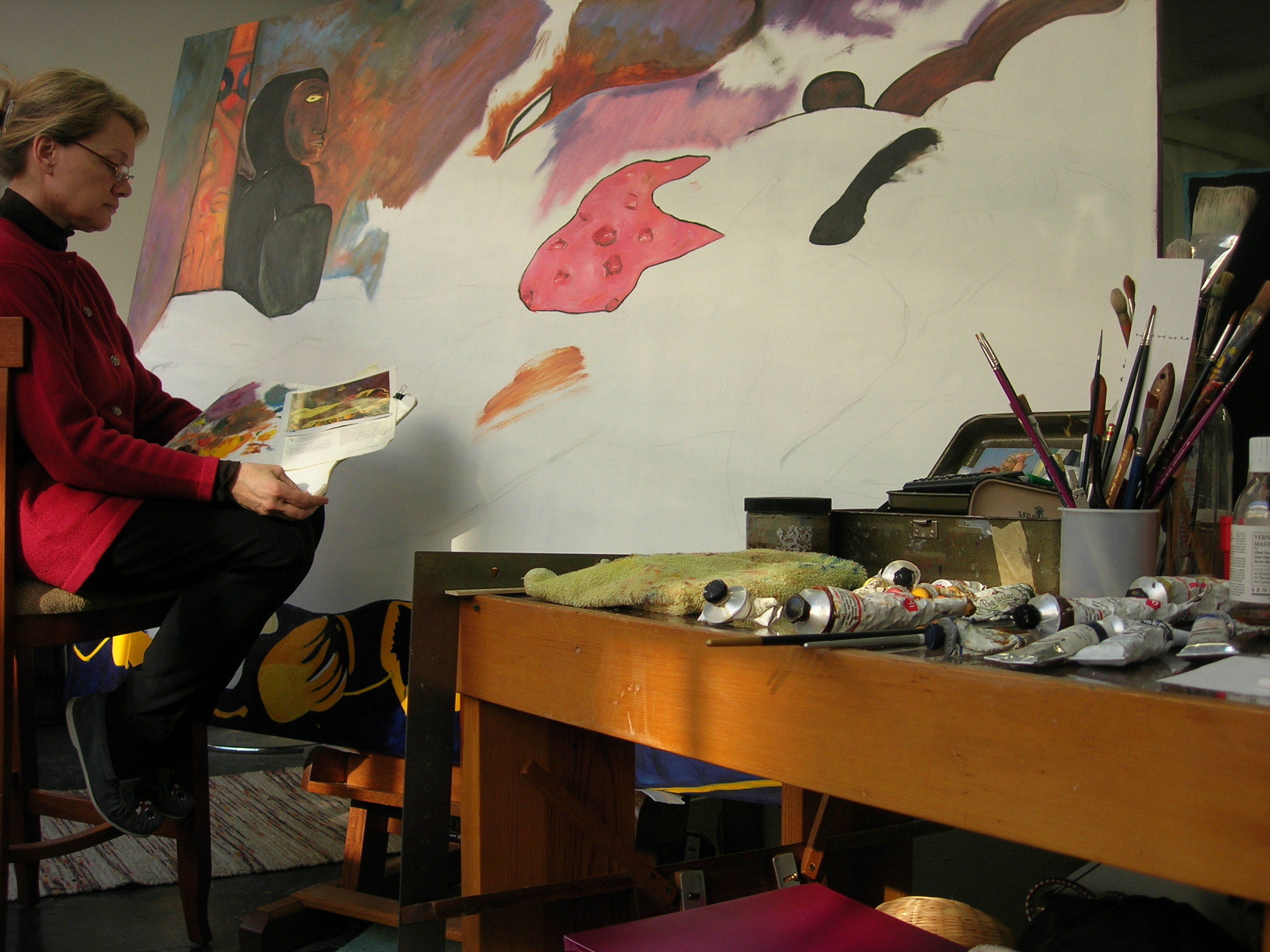 The author at her easel (photo courtesy of Peg Brand Weiser)

What follows is a guest post by Peg Brand Weiser.

The Feminist Caucus Committee (FCC) arose within the American Society for Aesthetics in the fall of 1990 with an impromptu meeting at the annual conference, that year in Austin, Texas. A chronology of events over the past three decades is now documented in a new online essay, “A Brief History of the FCC on the 30th Anniversary of its Founding,” co-authored by Carolyn Korsmeyer (Buffalo), Cynthia Freeland (Houston), and me. It is located on the FCC page that also celebrates faculty representatives at various summer programs for women and diversity. 2020 is also a year to celebrate the winners of the 30th Anniversary FCC Essay Prize: Sherry Irvin (Oklahoma) with Honorable Mention awarded to Alia Al-Saji (McGill).

As a young artist who earned a B.A. in Plastic and Graphic Arts (University of Illinois at Chicago, 1973) and then an M.A. in Fine Arts (University of Wisconsin-Madison, 1975), I joined an organization back in the 1970s that I thought would become my career home and support group: the College Art Association. (CAA, founded in 1911, is comprised of artists, art historians, designers, and visual art professionals.) My first attendance at an annual conference in Chicago in 1976—incredulously watching graduate students carrying 25” x 38” zipped, black, faux-leather portfolios containing samples of their original artworks—convinced me that this was not going to be easy. Once I learned how few female artists enjoyed one-person shows in the local galleries and Museum of Contemporary Art Chicago, and then became aware through the growing feminist movement within the CAA called the Women’s Caucus for Art (WCA, founded in 1972) how few women were actually succeeding in (Arthur C. Danto’s) Artworld, serious discouragement set in. (Please note that I do not fault Danto in any way; in an essay entitled, “Feminist Criticism: On Disturbatory Art and Beauty,” for the forthcoming Blackwell Companion to Arthur Danto, I show that Danto not only wrote about many women artists including Eva Hesse, Carolee Schneeman, Cindy Sherman, Judy Chicago, and Adrian Piper during his twenty years as an art critic for The Nation but also initiated feminist theorizing extolling their role in a historical feminist “revolution.”)

After completing two aesthetics courses at the University of Wisconsin that deviated from the prescribed curriculum in painting and printmaking, I took heart, applied to the philosophy program at the University of Illinois at Chicago, and chose to detour into philosophical aesthetics. I earned an M.A. in philosophy in 1978 and completed my Ph.D. with George Dickie in 1985, launching me directly into another nation-wide organization: the ASA. I was warmly welcomed at my first ASA meeting in 1985 (I roomed with the late Anita Silvers, feminist activist for disability rights) but could not help but notice a significant lack of feminist writing in the arts and membership that lagged behind the CAA in the number of women with graduate degrees, tenure-track or tenured jobs, and publications (recall that philosophy’s flagship feminist journal, HYPATIA: A Journal of Feminist Philosophy, wasn’t started until the mid-1980s). I felt I had traded one life choice—brimming with smart, enthusiastic women staging a revolution within the boundaries of art, art history, criticism and theory—for another: one defiantly rooted in the 19th century with Kant or the early 20th century with Duchamp and his over-hyped urinal.

Much has taken place since the mid-eighties to prompt us to officially chronicle the history of the FCC so as not to lose the all-important voices—of both men and women—who can tell the story of the Feminist Caucus within the ASA. Much more work still needs to be done: study early women of the ASA—presidents and personages like Susan Sontag and Juana de Laban, analyze trends within feminist aesthetics, and track its cross-fertilization with topics in race, ethnicity, disability, gender identity and sexuality. Much has also happened within the CAA but I only started to take notice when I recently remembered that we, as the ASA, were an “affiliated member” of the CAA which entitled us to one session per year at their annual conference. Having once submitted a proposal for a conference through the laborious process by which the CAA (two years in advance!) grants participation in the program, I realized the opportunity afforded the ASA. I was not the only one; ASA member Andrea Baldini organized an ASA panel at the 2019 CAA conference and again in 2020—“Embodied Beauties: The Politics and Aesthetics of the Moving Body”—with Eva Kit Wah Man, Aili  Bresnahan and me.

It was my opportunity to return to “The Mothership” and assess the CAA after four decades. First, I learned the conference had become very large; the CAA itself—now consisting of 9,000 members, draws over 5,000 attendees at their annual conference (with an incredible book display that includes new trends in both art technologies and art supplies). Second, the program consisted of more than 300 sessions (online, it runs 132 pages); this compares to 50 sessions in 1976. Third, for the first time ever, the CAA Committee on Women in the Arts (CWA) instituted a CWA 50/50 initiative that led the CAA to commit 50% of the 2020 conference to Women Centered Content that recognized the passage of the 19th amendment in 1920. In other words, to celebrate Women’s Suffrage (1919-2019), 50% of the sessions were women-centered! Moreover, the CWA—who collaborates with CAA-affiliated societies such as ArtTable, The Feminist Art Project (TFAP), the Women’s Caucus for Art (WCA), and the Queer Caucus—recently announced a “new action plan” to continue the CWA 50/50 initiative into the 2021 annual conference in NYC in conjunction with the TFAP:

We encourage submission of proposals recognizing the contributions of women to the visual arts, to critical and art-historical studies, feminism(s), and address the intersectional and transnational complexity of race, ethnicity, class, age, body size, disability, gender and sexual orientation in the arts, and reinforce inclusivity beyond binary understandings of gender. (The deadline has already passed.)

Clearly, the ASA is not the CAA; it has neither the membership nor the mindset to become an institution focused primarily on the visual arts and its inner workings. But as the ASA adopts new areas of interest—magic, video games, street art—it will be interesting to track the expansion of its traditional boundaries. The FCC took a stand in 1990 to establish both the credentials of female aestheticians and the legitimacy of their scholarly output. Recently, inspired by female colleagues in the visual arts, I have argued for a “post-revolutionary aesthetics” in an essay entitled, “The Feminist Art Project (TFAP) and Its Significance for Aesthetics,” forthcoming in Feminist Aesthetics and Philosophy of Art: Critical Visions, Creative Engagements. I offer five quick recommendations: (1) Kick the Canon; (2) Revise your (Modes of) Reading; (3) Dig for Deep Gender; (4) Enjoy Multiple Feminisms; and (5) Ditch Disinterestedness. As the Feminist Caucus Committee celebrates its endurance and ground-breaking achievements of the past thirty years, I invite you to imagine where post-revolutionary feminist aesthetics will end up in 2030, 2040, and beyond.

Notes on the Contributor
Peg Brand Weiser is Adjunct Instructor of Philosophy at the University of Arizona, and Emerita Associate Professor of Philosophy and Women’s Studies at Indiana University–Purdue University Indianapolis. She is the editor of Beauty Matters and Beauty Unlimited and served as the first chair of the Feminist Caucus Committee of the American Society for Aesthetics. Her artworks can be found at www.pegbrand.com.