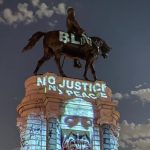 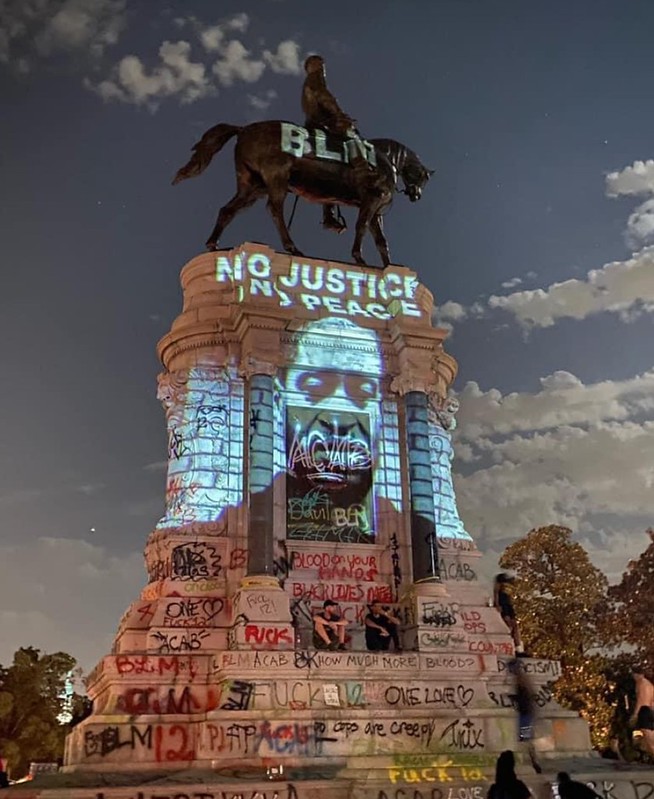 What follows is a guest post from Elizabeth Scarbrough.

In the past few weeks, we’ve seen people from various nations take to the street and graffiti, topple, and otherwise demand the removal of racist monuments. Among the more notable ousted statues in the United States is Confederate President Jefferson Davis on Monument Avenue in Richmond, Virginia, and slave-owning Founding Father Thomas Jefferson in Portland, Oregon. Christopher Columbus has fared no better, his statue beheaded in Boston and graffitied with blood on his hands in Miami. In the UK, slave-trader Edward Colson’s statue was toppled and thrown into Bristol harbor. And in Belgium a 150-year-old statue of King Leopold II was officially removed following mass protest.

Monuments are objects designed and created intentionally to remind us of something worth honoring. According to J.B. Jackson, “A traditional monument, as the origin of the word indicates, is an object which is supposed to remind us of something important. That is to say, it exists to put people in mind of some obligation they have incurred: a great public figure, a great public event, a great public declaration which the group had pledged itself to honor.” The aesthetic pleasure it might facilitate, Jackson believes, is secondary. In this way monuments have value as they remind their audience “of something important,” – some group commitment. While we might approach them as solitary individuals, their meaning is derived from some collective experience. As C. Thi Nguyen argues in “Monuments as Commitments: How Art Speaks to Groups and How Groups Think in Art” monuments are not only backward-looking. They ask us to commit to protect values, then act according to those values. In this sense, we rightfully decide to jettison values that no longer serve us – and consequently monuments of racist figures must too be jettisoned. And if it is time for these racist monuments to die, the question is – what should we do with their bodies?

Much of my philosophical work discusses the preservation and display of cultural heritage. I have advocated for allowing some tangible cultural heritage to fall into ruin. Monuments are no exception; we should neither expect nor desire them to be eternal. As the co-founder of Monument Lab Paul Farber said, “No monument is permanent. It has an aura of permanence, but it is maintained by financial resources and political systems that keep it in place. Monuments that are intact in a city have resources behind them.” The idea of spending resources to protect monuments of racist figures is properly infuriating. So what should be done?

First, we should advocate for their removal. For the statues that remain but have been altered, we should fully document the changes. For example, the beheaded Christopher Columbus statue offers a strikingly apt representation of today’s mood. The head of the colonizer lying on the street speaks volumes. The projection of George Floyd’s image over the statue of Robert E Lee is equally potent. Projections like these and graffiti tagging/art are ephemeral. These images must be preserved to document this particular time-slice of the monument’s life.

Funneling money into protecting and cleaning monuments of racist figures no longer expresses society’s values. One solution we should consider is to withdraw resources and allow the monument to fall into ruin. We could allow graffiti artists to augment the statues – slashing them with color and appropriate signage. I’ll call this option “intentional political ruination”. There have been a few cases of intentional political ruination (and I invite people to share others). For example, Hitler’s Bunker (Führerbunker) was allowed to ruinate to express Germany’s opposition to the Nazi party and the Third Reich. The German government encouraged vegetation to encompass the outside of the bunker’s tunnel systems, leaving them unmarked and hard to find. The site was not restored to preserve the historical value because the German government did not want to valorize past atrocities; instead the site naturally became a ruin. Allowing the bunker structure to ruinate appropriately symbolized the German government’s desire to allow the horrific events of World War II to decay and be absorbed by time.

Perhaps political ruination is an option here? It courts, however, some real dangers. We have already seen counter-protesters flock to monuments to protect them from “vandalism,” both here and abroad. Leaving the monuments where they stand leaves them as sights of conflict. The German government had to reverse their intentional political ruination of Führerbunker because, against their intention, it became a sort of pilgrimage site for Neo-Nazis. I worry that the same thing could happen today. The Germans ultimately razed the site, and it became a carpark. Also, the urgency of the moment suggests that ruination is too slow a process to meet the people’s need. Thus, leaving the monuments in situ – allowing them to ruinate – is not the best option.

Let’s assume that the appropriate response is to remove their bodies – what next? One obvious answer (and the answer Angela Davis gave in a recent interview with Democracy NOW) is to place the statues – with context – in some sort of museum. We have reasons to be wary of this solution. Museums have not been at the forefront (or even alongside) of the fight for anti-colonial and racial justice. Universalist museums (like the British Museum, the MET, etc.) have often been seen as institutions of oppression themselves, benefiting from systematic looting. Smaller, regional museums might do a better job of contextualizing their local monuments, but they are facing COVID (and other) financial hardships.

Barring the construction of new museums, cities and states could donate some of these statues to world museums. After the fall of the Berlin Wall pieces of the Wall were distributed to museums around the world. You can see pieces at no fewer than 8 places around Washington DC, including the U.S. Capitol, the Smithsonian, Newseum, Johns Hopkins University and more. However, even if we place some of the monuments around the world in cultural institutions, the sheer number of statues probably outnumbers readily available homes. Plus, not every statue of Jefferson Davis or Christopher Columbus needs preserving. Many have little historical importance and less aesthetic value.

Another option is to remove the monuments, smelt those that can be smelted, and turn them into monuments expressing contemporary or aspiration values. An argument against smelting is that it erases history. One may find value in a monument of a racist figure remaining as a reminder of our ugly past. We need to remember our history, not make it invisible. Erasing the symbols of white supremacy does little – by itself – to erase it.

Let’s revisit the idea of political ruination. I believe the most salient feature of ruins, and thus of ruin appreciation, is that ruins are in the process of decay. Objects in the process of decay are objects in transition. Thus, ruins do not serve as monuments (or not as well) because they are not static. If ruins are in the process of decay, every time we visit them, we will encounter different aesthetic properties. This transience is particularly good at prompting reflection. Ruins thus serve as object lessons and memento mori. Turning monuments into ruins show us that these objects are not worthy of protection but are more beautiful in their decayed state than in any salutary or ceremonial capacity.

Though in situ ruination might lead to racist valorization, that doesn’t mean we should entirely give up on ruination for removed or disembodied monuments. One example can be seen in my current hometown. A local Miami bar owner, Adam Gersten, offered $5000 for the city to remove the Christopher Columbus statue (mentioned earlier) at Bayfront Park. On Twitter, Gersten said he had contacted a local eco-artist group, Coral Morphologic, to see if the statue could be thrown into the bay and turned into an artificial reef. This would be a form of intentional ruination, although not in situ. However, the co-founder of Coral Morphologic thinks this would give the sculpture too much credit: “Maybe with his head in the sand or face-down in the sand is more appropriate.” When thinking about intentional political ruination, the aesthetic is symbolic. Christopher Columbus with his head in the sand perhaps would be a fitting tribute to the man. It may be a moot point, however. The bronze statue would be toxic to marine life and thus is a terrible candidate for an artificial reef. Where else might their bodies be laid to rest?

Perhaps we take our analogy to persons seriously and place these monuments in a public monuments’ graveyard – a Potter’s field for those whose identity was too known. Allow racist monuments to die, and leave their bones bare in a monument graveyard. This might symbolize the termination of a period of time where our public commitment to white supremacy was on full display. Erasing it would be symbolically erasing our past. Allowing the sculptures to publicly decay would allow us to symbolically lay these ideas and monuments to rest. Not to memorialize – but to acknowledge the end of their life cycle.

I don’t presume to think I have the answers – but I do know that it is time we start thinking about what comes next. Removing the statues was powerfully symbolic; how we treat them in their death is too.

Notes on the Contributor
Elizabeth Scarbrough is an assistant teaching professor at Florida International University. Her research focuses on the ethics and aesthetics of cultural heritage.