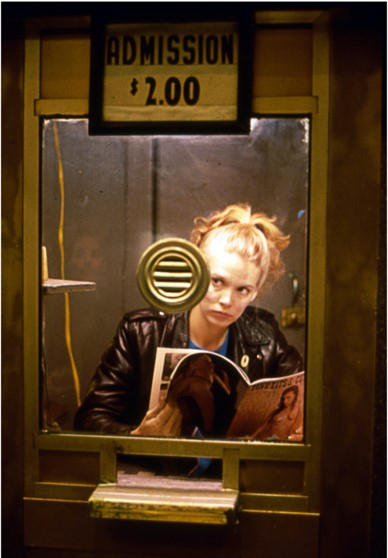 Today, we’re starting a new series. During the first week of each month, Francey Russell (Barnard/Columbia) will offer a philosophical reflection on film: a single film, a director, a technique, a genre, an author, etc. Plots will be discussed, hence spoilers.

The film, directed by Bette Gordon and co-written by Kathy Acker, was released in 1983 to mixed reviews, though it is now revered. The film includes early performances by Luis Guzmán, Will Patton, Coco Fusco, and Nan Goldin (who also did the production stills), with cinematography by Tom de Cillo, and music by John Lurie. The year before the film was released, Gordon, along with Kaja Silverman, presented on a panel called “Pornography and the Construction of the Female Subject” at the now famous/infamous 1982 Barnard Conference on Sexuality.

This is a film about watching, and the ways in which gender articulates the worlds of vision and action. Christine is never bashful about her new position, yet Gordon frequently confines her body within the narrow window of the ticket booth, requiring that she hunch in order to make eye contact with the customers. When she steps out for a cigarette, Christine lingers in Variety’s foyer listening to sounds of movies she cannot see. At a diner counter, after Christine tells her journalist boyfriend about her new job, he puts down his fork and reels before leaving lunch early; Christine keeps eating. Throughout, the film shows little interest in Christine’s inner life or psychology. There is no backstory, and McLeod’s performance is wonderfully flat. Gordon is more concerned with how deep questions about agency, gender, and vision can be explored through surfaces: lines and spaces, movement and stillness.

Back at Variety, an obviously wealthy and older customer named Louie buys Christine a Coke and takes her on a date to a Yankees game. In the middle of it he leaves her—with his apologies—called away by another man who whispers discreetly in his ear (about his work? about his wife?). The film shifts gears. Having previously been enclosed in frames and hallways and rich men’s limousines, Christine begins to move. She follows Louie out of the ballgame, into motels and underhanded union dealings at the Fulton Fish Market; she browses magazines at porno shops as the patrons stare her down or hide their faces; she steps into the movie theaters at Variety to finally see what the men have been watching. Gordon’s camera becomes mobile and the shots open up; the vertical lines start to disappear. The film itself adjusts around its subject’s new agency, which is not intentional or intellectual, but corporeal and exploratory (though not tentative): what would it be like if I did not stay still? what would what would happen if I looked back?

Variety is sometimes described as a story of a woman’s sexual awakening. But rather than psychologize the film and speculate about what is going on inside “Christine’s mind,” why not stay with what is there on the screen? If we do this, we find a film that is not about a woman realizing what she authentically desires, but about a woman testing where she can go and what she can do.

Gordon is also interested in testing what narrative film can do.

About three-quarters of the way through, something happens to the film itself: For a few moments, the narrative suspends, while the film’s form—its organizing aesthetic structure—dislocates twice. In the first sequence, Christine lies flat on a bed against a window lit up with neon light through noirish horizontal blinds, as a hypnotic and unidentified male voice intones instructions to relax (relax your arms, relax your wrists…). Her body runs the length of the frame, as though weighted down by the glaring color and heavy voice. While this scene could, of course, be interpreted narratively—”Christine listens to a meditation tape”—the incongruent formal qualities situate the scene in a different aesthetic register, signaling a transformation that runs deeper than plot.

The second sequence: a series of short clips of men shaking each other’s hands as the instructions to relax drones on, all men’s hands, often filmed in anonymous close up, they are any man’s hands, every man’s hands. The sequence runs longer than expected, as though this action, or transaction, could be (has been) iterated forever, as though everything in Christine’s world were maintained by men shaking hands, confirming each other, confirming this world. From the perspective of the film’s narrative, the sequence is deeply and productively unsettling. From the perspective of narrative, something has gone badly wrong, as though the film got stuck on a beat and lost the plot.

More thrilling than a plot twist, an unexpected shift at the level of the film’s form is maybe the most exciting that can happen in a movie. Movies take time, and they use that time to establish and elaborate not only a narrative world but a fundamental governing form that organizes the film and orients the viewer. It is striking how quickly a film establishes its aesthetic orientation, and how quickly viewers gear into it, learning how to go on with it, as Wittgenstein would say. In learning how to go on with a film, we learn not what will come next but how it will come.

A familiar and domesticated example of a shift at the level of the form is the dream sequence. This is a domesticated move because dream sequences announce and stabilize the distinction between a character’s dream and her reality, hence the formal shift is marked and bracketed. But something much more radical happens when a film inserts a sequence that is formally divergent yet not narratively contained. In this case, the part dislocates the whole. The film does not go on as before. This is not a change within the film world (not a plot twist or a character development); rather it is a brief formal eruption that convulses the film as a whole. These momentary shifts transform, retrospectively, everything that came before, and in so doing the sequence transforms our own relationship to and experience of the film. If a film can go on like this, then one no longer knows quite how to go on with it. (One of the most celebrated instances of such a brief formal dislocation is the final sequence of Claire Denis’ Beau Travail. See Erika Balsom’s analysis.)

Variety’s narrative eventually resumes, but even back inside the plot, the film is not the same. Christine continues into stranger modes of activity, activities that are seemingly emptied of ordinary motivation and increasingly arch and performative (non-natural acting style can also function as a formal disruption). On a phone call, Louie wants to know, what does she want from him? Louie is, in this way, still operating within the expectations of a standard narrative, he still expects the why question to apply. Christine laughs in response. She says she doesn’t know why, yet.

Variety ends moments later in a dark parking lot, ominous, serene, and inconclusive. It is not clear what Christine wants or why she acts, but the film’s formal shifts and opaque final shot suggest something previously unimaginable is now becoming possible, even while unknown. Christine does not yet fully inhabit her new agency with purpose and understanding; it seems that agential interiority will come only belatedly (if it does), and only after a shift in form. This is a film about how not to go on as before.