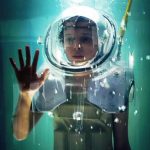 In the past, we have posted appropriately themed music videos for the holidays (see here and here). But we’ve decided to take it up a notch! This Halloween, we’re spotlighting a few holiday-appropriate works of art with mini-essays by our staff writers.

It’s Pennywise meets Mozart. Berlioz’s ultra-influential Symphonie Fantastique was a music video before there was video. It’s a piece of program music, music that’s supposed to map onto a specific non-musical narrative. Berlioz wrote textual notes on what we should be imagining while listening. The story: An artist falls in delirious love with a woman and eventually attempts suicide (with opium – what else?) out of a perceived unrequited love. Like a crazed Vivaldi, the symphony starts almost spring-like, in the blossoming and frenzy of new love, and ends darkly with a hallucinated walk to the scaffold. In the Fifth Movement, the witches’ celebratory dance follows the tune of a distorted Dies irae, a traditional section of a Requiem.

It raises interesting questions, too. Berlioz wrote of the program notes: “The following programme must therefore be considered as the spoken text of an opera, which serves to introduce musical movements and to motivate their character and expression.” Should we then think of the *full* symphony as including this text, so that the symphony is as incomplete without it as it would be if it were missing a movement? Is that how we think of music videos? Soundtracks? Songs with lyrics we can’t understand?

Italian prog rock outfit Goblin didn’t start out with the intention of being known pretty much only for horror movie soundtracks, but alas, that’s what happened.  Originally known as Cherry Five, they renamed themselves Goblin when they signed on to record the soundtrack for Dario Argento’s Deep Red in 1975.  All of their horror soundtracks are worthwhile, but their greatest work is arguably their 1977 soundtrack for Argento’s masterpiece Suspiria.  The film is about a young woman who moves into a creepy ballet school in Freiburg, Germany, that turns out to be controlled by a coven of diabolical witches.  The eponymous track from Goblin’s soundtrack layers all sorts of creepy chimes, whispers (witches!), and synth sounds with repetitive chanting that resembles a demonic variant of a lullaby.  It’s awesome.  Blast it loud to terrify trick-or-treaters.

Netflix’s charmingly retro horror series Stranger Things derives its charm not just from its meticulous attention to costuming and props, nor just as a wellspring of nostalgia for mythical Gen X childhoods spent tooling around on banana-seat bikes after breakfasts of Eggos, but because it feels as if it was conceived in the 80s. Consider the sensory deprivation tank in which Eleven floats. It looks as if someone designed it in 1983 to be…. sciency and futuristic. She’s in a tan unitard. The visual language of the series mimics not 1984, but how 1984 conceived of science fiction and horror. So, too, the soundtrack, by SURVIVE; all glorious, looping, layered synths. Guaranteed to knock your Vans off.

Buffy Theme from Buffy the Vampire Slayer (1997-2003), by Nerf Herder (covered by The Breeders)

This song just all around rocks: from the repeated pick slide to the frantic three-note guitar lead at the end. And the pop punk/geek rock outfit that wrote and recorded this now-iconic little ditty is named after an insult from The Empire Strikes Back. What’s not to love?

But in addition to the vampire-and-demon themed, Halloween-ey goodness of the show itself, there’s a serious aspect to this choice as well. Throughout it’s run, but especially in its seventh and final season, Buffy was explicitly engaging with the the issues and conflicts of the third-wave feminism of the late 1990s and early 2000s. There are various aspects of the Buffy-as-feminist-action-icon idea that can be (and have been) criticized, but there is no doubt that the show played a pivotal role in how an entire generation of young people understood gender.

In addition, Buffy the Vampire slayer played an important role in the history of television as an art form, as Joss Whedon and company developed the more sophisticated storytelling methods that are now commonplace in the current “Golden Age of Television”, including but not limited to:

It’s thus no surprise that, according to Slate, Buffy the Vampire Slayer is (by a good margin) the most studied pop cultural artifact of all time.

Oh, and the link above is to a cover of the tune by The Breeders. Cause they’re awesome too.