The AFB Cover Month Philosophy Contest tasked philosophers with providing (in 50 words or fewer) an answer to the question “Can a Band be its own Cover Band?”
I received nearly two dozen entries, which were anonymized and sent along to independent judge P.D. Magnus (Albany). Below are the results, followed by a nice summary from the honorable Judge Magnus.
1st Place: BP Morton (Winner of an AFB T-shirt & Sticker Packet):
2nd Place: Eric Wiland (Winner of an AFB Sticker Packet):
Honorable Mentions: Roy T. Cook, Jim Hamlyn, & Jonathan Weinberg
*******************************
Judge’s Report
The contest grew out of a conversation between Christy and me about whether musicians adopting different personas might do a cover of a song they had recorded earlier. It would have been easy to get caught up in how to define a ‘cover’, but we quickly realized that the meatier philosophical question was about the identity conditions of a band. Neither of us have an account of that, so he decided a contest was in order. I agreed to be the judge, so that entries could be judged anonymously.
I expected the entries to fall into two broad categories: No, with general considerations to show that it is impossible for a band to cover itself. Yes, with a thought-experiment scenario in which we can imagine a band becoming its own cover band.
The first strategy calls for a straightforward deduction; something like this:
1. By definition: A cover version is performed by someone other than the original artist.
2. By definition: A cover band of X plays cover versions of X’s songs.
3. The original band is the original artist and not someone else.
Therefore, the original band cannot be a cover band.
To my surprise, nobody quite made this argument. In fact, out of 21 entries, only four answered no to the assigned question. (Most answered yes, and one equivocated.)
Several entries presume that the relation ‘A covers B’ is transitive. All of those entries got set aside, because their assumption is just false. There are two accounts of cover songs in the literature. Kania (2006) argues that the target of a cover version is a thinly-specified song. Magnus, Magnus, and Mag Uidhir (2013) argue that a cover version targets a specific prior version. In neither case is the relation transitive.
Another entry invoked the distinction made by Magnus, Magnus, and Mag Uidhir between mimic and rendition covers. Well played, given who organized the contest and who secretly was going to judge it, but not ultimately persuausive.
Three entries merit honorable mention. (I saw these as numbered entries, and I’ve asked Christy to fill in names.)
The entry by Roy T. Cook was the cleverest of the no answers. The author defines a [i]perfect cover band[/i] and goes on to give a natural deduction proof that it is impossible to know that a band is a perfect cover band of itself. The definition is that “A is a perfect cover band of B” iff we cannot determine whether A and B are the same or distinct. The proof submitted cuts a corner, presuming without mention that knowledge is closed under implication. I mark partial credit. 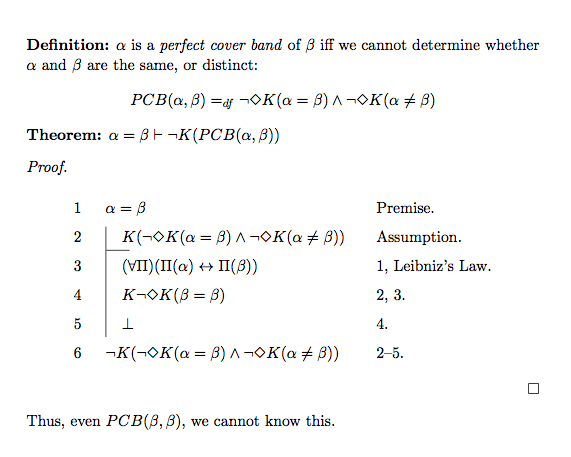 The entry by Jonathan Weinberg was written in a nice analytic style and posed a schematic scenario for a yes answer:
Suppose band B has sound S1 at t1, and then by t2 their sound evolves to S2. Now suppose by t3 they abandon S2, and pursue a career simply reproducing their t1 songs performed a la S1. Then B at t3 is a cover band of B at t1.
This answer plays nicely with the identity conditions for a band, suggesting that later time slices of a band might be a different band than earlier time slices. A few other entries similarly relied on different time slices of the same band, but this one was clearest. However, as Cristyn pointed out to me as I was mulling over answers, fans don’t actually think about bands this way as the bands get older. When a band is forced to play their old hits even though they have moved on musically, we might think it’s sad but we don’t call them a cover band.
The entry by Jim Hamlyn was the only one written in verse. It poses a yes-answer scenario that is similar to the one in the winning entry, but somewhat less precise. Perhaps imprecision is the price of doggerel.
A band can be a cover band
By a form of exaggeration and
By mocking, shamming or otherwise hamming
Their art as if by another’s hand.
Second place goes to the entry by Eric Wiland:
A band can be its own cover band. I’ll argue by example. The White Stripes would cover themselves if they were to play all their songs with Jack on drums and Meg singing lead and playing guitar. Interestingly, a solo artist cannot cover herself.
The crucial thing is that Meg played drums in the White Stripes while Jack played guitar and sang lead. We typically identify a band not just by its members but by what each member does in the band. So having everyone trades roles could constitute a different band and allow the same people to constitute a cover band. (I had to look up the lineup of the White Stripes to make sure I understood the crucial thing correctly. Points off for clarity.)
The winner is BP Morton, who wrote:
Sure! Imagine a band that secretly re-unites, pretends to be a cover band of itself, and is taken as such by its new audience. Whether they fess up or not, by posing as a cover band successfully and being taken as one, they have become a cover band of themselves.
The idea plays on an ambiguity of what it is to be the same band: The band in the scenario is the same band in one sense because it has the same members playing the same parts. The band is a new band in another sense because band identity is a social fact, constituted by the members presenting themselves in a certain way and being accepted by the audience. It’s even if just being a cover band is a social fact in that sense.
Congratulations to the the winners, but I had fun reading all of the entries. Thanks to Christy for the chance to decide the matter.